Continuing the theme of “what the heck do I do for work”, I’m writing about Customer Success as I see it. My words are my own, I don’t speak for the industry as a whole, or even for Litmus. I’m just trying to sharpen my own thinking.

I talked about why I disagree about the cost center assessment, and how someone in customer support could convince their executive team to view the support team as a profit center. That’s a long and arduous road, and most organizations won’t make the switch.

An enterprising individual can capitalize on this reluctance an organization has to view the support team in a better light, because that means theres tons of room to shine, get good experience under their belt, and leverage that data, knowledge, and perspective into a much better job for a new company.

So what the heck is customer success? #

Update: I had an imaginary support interaction sketched out, but then I had a little kerfuffle with American Airlines today, so using that as my example story.

Think of everything your customer support team does. Now change the direction and timing of communication from customer > support to support > customer.

Here’s a story that must happen a few hundred times a day with American Airlines:

I tried to check into a flight tomorrow. It was booked with miles, over the phone, and I modified it a few times (over the phone) since the original booking. It’s from Barcelona>Madrid>Miami>Philadelphia (oof). 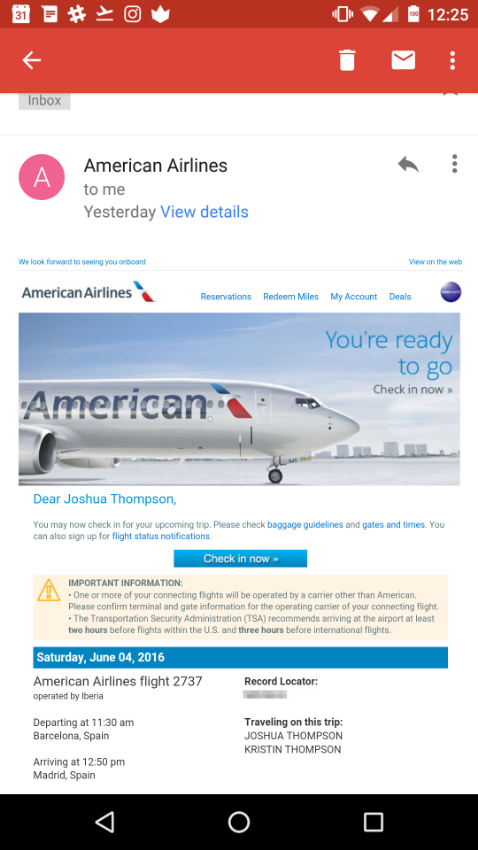 Email prompting me to check into my flight. Almost illegible because the text is so small.

I got the following error code: 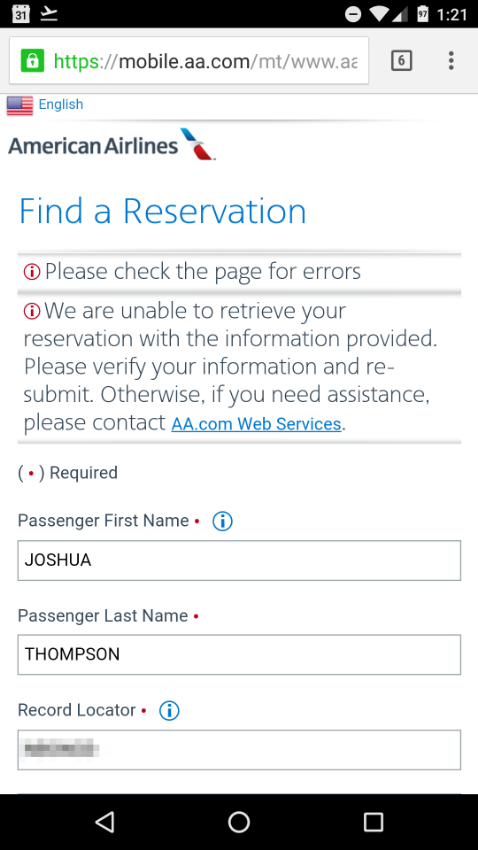 Do I actually have a flight tomorrow?

This was this morning, on my phone, sitting in a different airport.

I became worried that there were problems with the flight, since I’d booked it and rebooked it and made modifications and cancelled the original itinerary. I didn’t have time to sort it out then (sitting in an airport) so planned on fixing it later. (“Sort it out” invariably means having my laptop out, and 40 minutes to spend on the phone.)

Later, Kristi and I arrive to our apartment in Barcelona. We’re eager to get out the door to explore the city (it was 5p already!) but I tell Kristi I need to try to sort out the check-in problem.

I try checking in on my computer, get this: 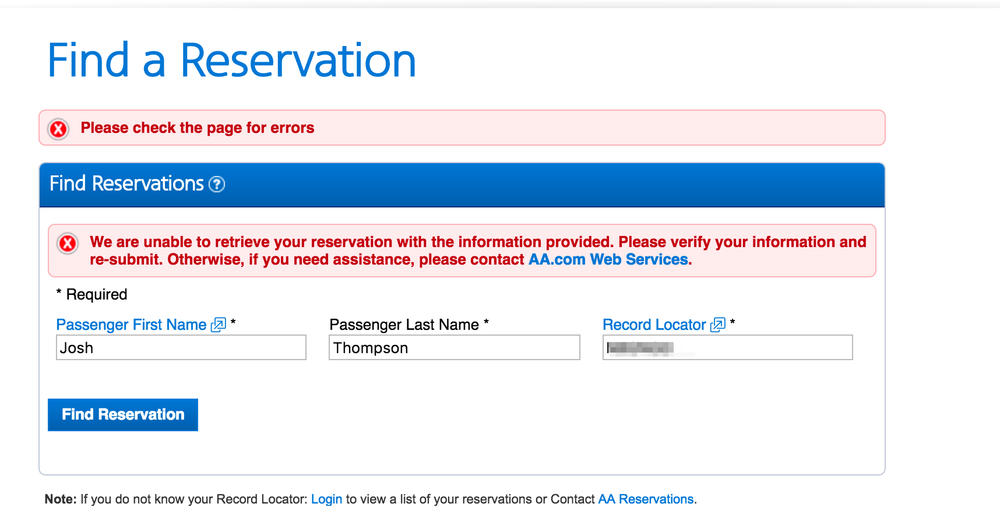 This error message tells me nothing about what the problem is. (Spoiler alert, everything was fine, but this message doesn’t exactly put you at ease, does it?)

OK, it said something about the partner airline in the email, so I head over to the Iberian checkin page:

Aaaand I get an uninspiring error message:

“It’s not our fault this didn’t work. Please talk to American” - Iberian Air

Not good. I’m hoping my wife and I are going to get back to the US tomorrow. Per the instructions provided on the AA error page, I called AA.com Web Services.

To AA’s credit, they answered fairly quickly. The first woman I spoke to hunted around for a few minutes on her computer, could not resolve the issue.

I was handed off to a reservation agent, who explained the problem.

For award tickets booked through partner airlines, you have to check in at the airport. You’re not able to check in online, because the systems don’t talk to each other very well in the backend

This is great news, and I can totally sympathize with data problems.

In short The system is functioning as expected, I simply cannot check in online. This has happened to me before, it will happen again. I’m happy to check in at the airport,  as long as I feel confident that I’ll have a flight to check in TO!

She offers to pass me through to Iberian air, just so I can talk with them. She gave me my Iberian record locator, though at this point, I was satisfied with the answer.

I took her up on the offer, and was passed along to Iberian. The woman from Iberian conveyed the same message, and I now feel at peace about flying back to the USA tomorrow.

This is an expensive process for myself and American Airlines #

Here’s the kicker: All of this could have been avoided.

In the email containing my record locator, instead of the primary CTA being “Check in now” (in a poorly formatted, almost illegible email, by the way) they should have said: 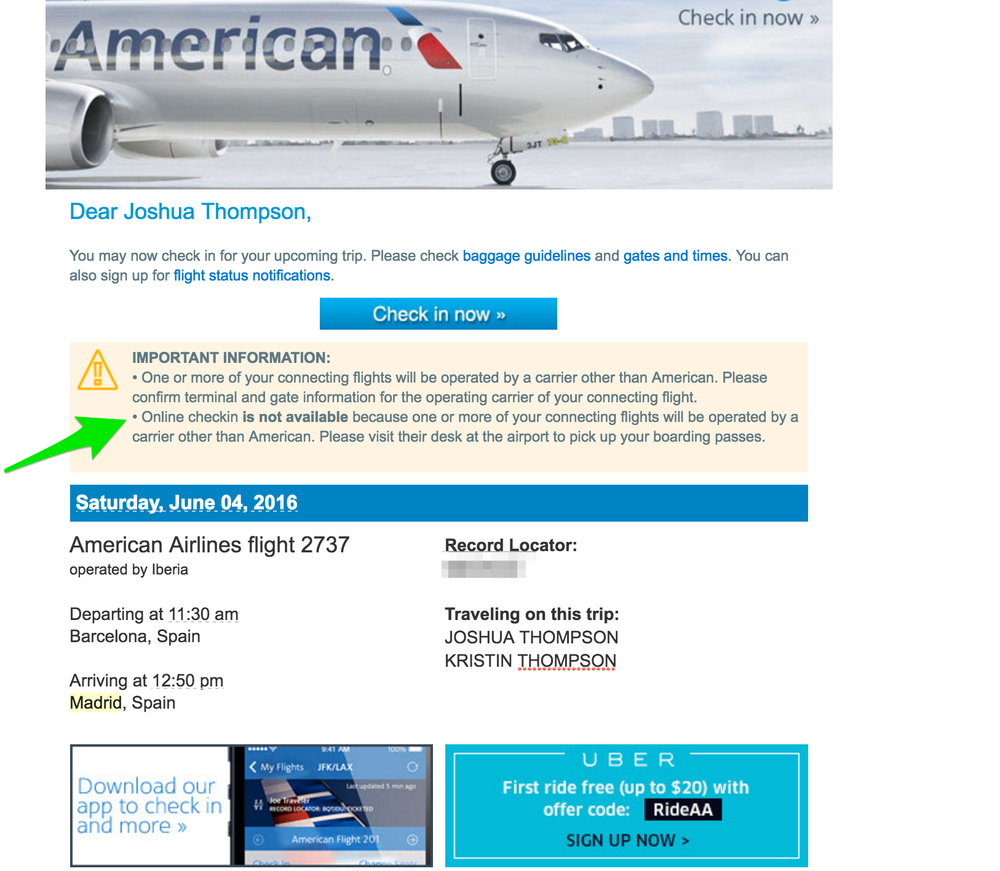 In the original email, that 2nd bullet was wasted by warning that the TSA is terrible.

That little line of text alone would have made me feel 10x better about what was coming.

Alternatively, they could have done a little work when I tried to check in online, too: 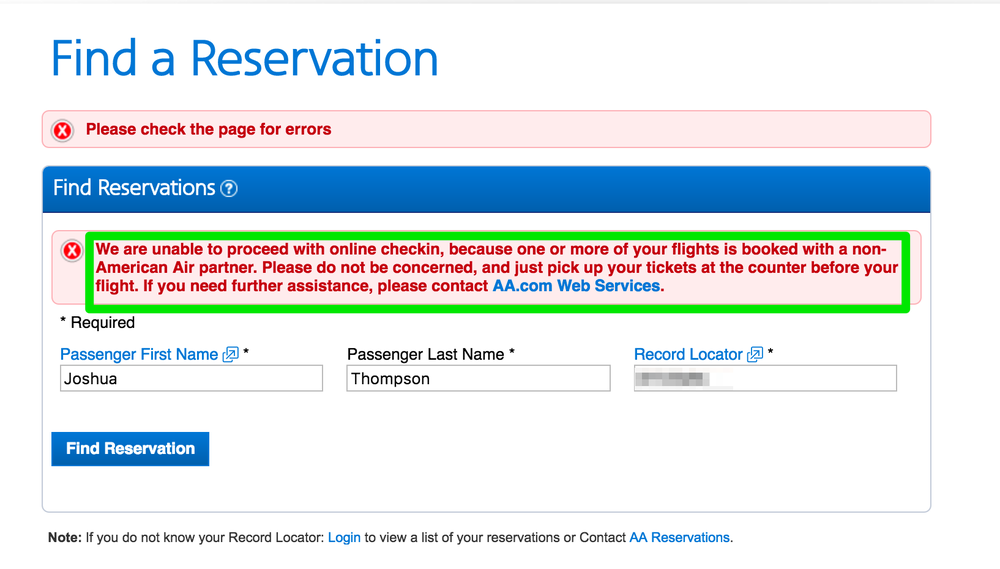 This is a simulated error message. The real one didn’t say anything helpful.

So, that was my poor experience, but does that mean American should actually do anything about this? After all, they’ve got limited resources, and many things to do. They cannot, and should not, try to fix every single little problem a customer has.

IS THIS REALLY A PROBLEM? #

American says it flies ~6700 flights/day. Quora guesses 150 people per plane, on average, so that works out to about a million people PER DAY flying on American or an affiliated airline.

I don’t know the percentage of customers who experience the exact same work flow I experience. Lets assume it’s 2%.

This 30,000 man hours/month is the the equivalent annual hours of over four full-time employees. Assuming their staff cost $15/hr to employ, this particular problem is burning about $500k/month in support hours alone.

Now, that’s just the cost side of things. A half-million dollar/month problem seems big to you and I, but to a company bringing in $4 billion/year in profit, it’s not a big deal.

The higher cost of this problem is to the customers who find it easy to move their spending to a different airline. Going back to those 20,000 people/day who experience this problem. Only 1/5 of them contacted American, which accounted for the $6m/year in staff payroll expense. That larger group spends, on average, $400/round trip ticket.

$400/ticket * 20,000 people/day * 365 days/year means this problem is “touching” about $2.9B a YEAR in spending. You should care deeply that they have a good experience with your airline.

So, by my math, yes, this is a problem and it should get development/marketing/support/billing resources to fix. Even if my math is all wrong, it’s a starting point for the folks at American to decide how to fix this.

Barriers to fixing this #

As you might assume, no fix is simple. Complexity plus “not my problem” plus “don’t mess with my group” makes this a thorny problem. Here’s a few reasons a fix would be hard to implement:

Who owns the problem?

If someone from American said “hm, yes, I agree, lets fix that” and implemented a fix, the fix would touch on much more than just a single team. You’d need:

Great question. Here’s the barriers to pushing something like this through:

Who’s problem is it?

Who, in American, feels the pain from this problem?

Not support - they’ve got a long list of problems their customers face every day, that range from bugs, to feature requests, to confusing workflows.

This isn’t a concern to the average product manager. It’s a billing question, not something related to product.

Not the dev team. The error messages are populating as expected, and they built the checkin workflows to spec.

The customer will end up paying the invoice, so this problem isn’t even costing the company any money.

It’s not a problem for the marketing team. They have their own metrics to hit, and reducing numbers of calls to the service center is not on their radar.

The success team makes the financial case for this #

This would be a problem that could be owned by the customer success team.

They would track as a primary metric customer loyalty, and churn. They would be intimately aware that every time someone has to contact support and doesn’t want to, that “costs” customer loyalty. It is much more painful for the customer than it is for the company. (This was fixed with 15 minutes spread out over three different reps. No big deal, but it cost me maybe 40 minutes of time, and five hours of stress.)

So, the customer success team can own the complicated fix. They’ll figure out the spec of what needs to go in the dev pipeline, they’ll get the copy approval from the marketing team, and they’ll gather metrics from the support team about how often they hear from customers that might have this question.

They’ll put open/click tracking in the notification emails that goes to the customers, to see if customers are opening the email, reading it, and clicking the call-to-action to gather more information.

They’ll roll it out, and see if it results in a decrease in a number of calls to the support team.

Overall, they can advocate for the customer to all teams. This is how they get past the “nothing is broken” response from the dev team, or the “this isn’t related to marketing” response from the marketing team. The support team will be onboard from the get-go.

Hold on, Josh, you just painted the marketing and dev teams in a negative light. Of course they’ll want to be responsive to pain the customers feel. You’re being unfair.

They’re responsive to customer pain, and they’re on the hook to do way more work than they can actually do. The dev team ALWAYS has an enormous to-do list, and they would be foolish to let just anyone stick more items into their list.

Same with the marketing team. They’re busy, and don’t have time to implement “good ideas” without knowing they will get a good ROI for their effort.

So the Success team can own the reasons, and will have an ongoing, trusting relationship with the dev and marketing teams. If the success team makes it a priority and owns most of the implementation, the other teams are happy to help.

Who decides if this was a productive use of time? #

The goal of the customer success team is to ensure that the customer achieves his/her Desired Outcome with the minimum effort. This goal, if executed well, leads to many happy customers who pay you money and tell their friends/coworkers to do the same. I’ve already made the case that the worst-case impact of this problem is $2.9B/year. Even if I’m WAY off, this problem could still be impacting hundreds of millions in revenue. It needs to be fixed.

Traditionally, this general theme might fit under a User Experience role, but I think in a small-to-medium sized company, before they have a dedicated UX team, a fix like this could be owned by the success team, since they can advocate on behalf of the customers.

The Customer Success team can follow the needs of the customer wherever they might go, drawing on resources from anywhere in the company to deliver these solutions. Throughout, they are backed by the most important metric to a company: revenue.

It’s a pretty exciting field to be in. Where else do you get to spend all day solving big problems for large numbers of people?