How to Wake Up Early

An understanding of sleep, and attempts to wake up early

My understanding of sleep has evolved. When I was born, I spent most of my time asleep (if I recall correctly…) and gradually spent less and less time sleeping, until I was down to about eight hours of sleep a night. That was my ideal amount, and if I got much less, I would be tired during the day.

Except sometimes I’d get less than eight hours and not be tired during the day, and sometimes I would would get more than eight hours and still be quite tired. So I ignored most of those abnormalities, tried to get as much sleep as I could, and absolutely dreaded getting up in the mornings - my alarm would go off and I would hit snooze at least three times until absolutely had to get up to get to work. If I didn’t have work, I’d just sleep until it was too sunny and warm to keep sleeping. more

The rare instances where I did drag myself out of bed in the morning, earlier than I had to, I would usually just sit down at my computer and, in a fog of sleepiness, waste the entire time period I had earned on Facebook, or reading blogs, or doing other insignificant work. This pattern led to me feeling guilty about how I spent my time, since I had tried so hard to get up early, and then wasted the whole thing.

I had many instances of failure to wake up early, and felt guilt about them. The few instances where I did take up, I still felt guilt about my poor time management. I never enjoyed the process, and basically “gave up” on getting up early. I resigned my mornings to a perpetual struggle with my alarm clock.

The long and slow process from “up by noon” to “sometimes up by five… if I feel like it”. #

I spent months thinking about waking up early, but it was never well-defined, nor did I have a good reason to do so, other than people who were more skilled and productive than I seemed to get up early. I wanted to be like them, so I wanted to get up early too. This is all sound reasoning, right?

I started tracking my energy levels throughout the day, after reading The Personal MBA by Josh Kaufman (Highly recommended) I’ve got records from as far back as August 2012 (nine months ago) about my energy levels, and my sleep patterns - even then I was trying to wake up early, and was very bad at it.

I eventually reworked my understanding of waking up early because of two changes:

I first read about alternative sleep cycles in The Four Hour Body by Timothy Ferris. That led me to a very interesting blog by Dustin Curtis, and then here, and here, and somewhere in all that I read Steve Pavlina’s sleep (b)log.

The inescapable conclusion is this: there are a lot of people out there who try some really insane sleep patterns, and they have success. If that works for them, how much easier must it be to try a much less-insane sleep hack? I decided to start the whole process by experimenting with just being awake and content with life at an early hour. If I could do that, I could decide where to go from there.

I removed (or began removing) my mental barrier to being up when it was still dark out. I saw early rising as a goal to achieve rather than a burden to bear.

The other change related to willpower - as I’ve touched on before, and will do so again, willpower is just like a muscle. It can be worn out and depleted. I want to preserve my willpower as much as possible to use on things that need it. If I use all my willpower dragging myself out of bed, I’ve ruined the rest of my day, because I used up all my willpower.

I will up early in the morning only if I want to - if my alarm goes off and I don’t want to get out of bed, I don’t.There was a period where my alarm would go off when I wanted to get up, and I would not. I would repeat this pattern daily, waking up at 5:00 AM, silencing the alarm, and waking up again at 6:30-7:00 AM to begin my day. I did not guilt myself for not getting up the first time, I just used it as an indicator that I had not created the right context in which I would wake up early.

I had reworked my understanding of sleep, and given myself permission to get up only if I really wanted to, but there was still a problem. I did not want to get up early! I am not particularly busy, nor committed to social activities, so most of what I wanted to do during the day got done, and everything else wasn’t exciting enough to make me want to get up at 5:00 AM to do it. (Paying bills! Opening mail! Reading books!)

The necessary third component presented itself on Lynda.com. It was a training program to teach the viewer how to better use Microsoft Excel, and better exercise.

What that learning represented, however, was truly exciting. There are projects I am excited to pursue at my work that require a lot of data manipulation - since I’ve taken ownership of some of those ideas, I need to learn how to make them happen. A deep understanding of how to use Excel will allow me to complete some open projects of mine that are not work-related. Studying on Lynda.com represented was an opportunity for me to make a potentially large impact at work, and in my “on-the-side” work that I am pursuing on my own.

Exercise “hacking” was motivating because I was confident that I could get good returns on less than ten minutes of exercise a day - I was very excited to test myself in this way. I alternated between my climbing workout and Russian Kettlebell Swings.

I don’t spend every morning learning Excel, or exercising, but I do spend that time developing skills that will allow me to exert much greater control over my career and life.

This makes me excited to get up early every morning.

I use my desire to wake up in the morning as a useful indicator for if I think I can move myself in a positive direction with various bits of training or learning. I’m generally pretty excited to learn new things or read good books - thus far, this general enthusiasm has been very effective at motivating my early rising.

When I wake up early and I don’t want to actually get out of bed, I have to re-examine the way that I would spend my morning. What am I doing that is so unmotivating that I don’t want to get up and do it? If I am not enthused about whatever voluntary project is before me, I modify/discard/replace that project. It is not worth expending all my will power to drag myself out of bed when I don’t want to get up to work on a project that is not interesting to me.

Remember - it is safe to fail often, and it should be easy. Both of these help provide valuable feedback.

I have not yet made this “early rising” thing a habit - I still want to fail, when needed, so I can keep refining my process.

Adhering to my “get up only if it’s easy” standard, however, has given me pretty good results - for thirteen of the last twenty seven days, I’ve gotten up before 6:00 AM. Nine of those days I’ve been up by 5:15 AM. With one exception, the latest I have slept is 8:15 AM. Of those mornings, I felt tired for just five of them. I consider this process to be highly successful, and I look forward to improving many aspects of how I sleep. 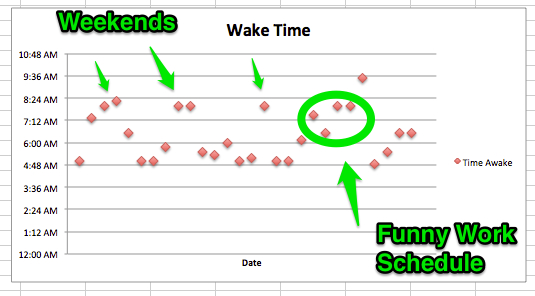 A key point is this: going forward, I am not considering myself an early riser - if I don’t want to wake up early on any given day, I will not expend the will power to force myself up. If I don’t want to wake up, I need to figure out how to improve the tasks I am choosing to spend my time on, so I want to wake up early. For example, on weekends, I still set my alarm early, but I usually don’t really feel like getting up early, so I don’t. This last weekend I had grand plans of getting things done, and when my alarm went off, I had grand plans of extra sleep. I kept it easy.

So what should you do? #

Don’t try to wake up early tomorrow morning. Or any time this week. Read the sources above, and start paying attention to your energy levels. 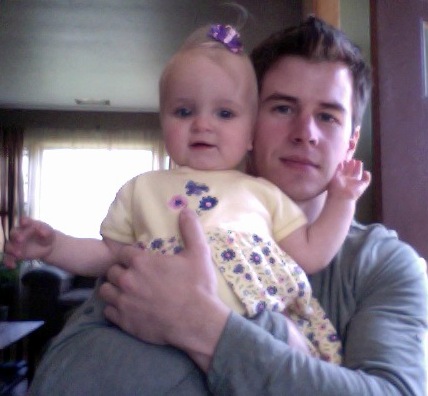 Read the articles I mentioned earlier - don’t read so that you can jump into the Uberman sleep schedule, but so you can familiarize yourself with being alert and comfortable at strange hours. Read them so you can learn to ignore that voice that wants to scream bloody murder when you wake up early.