Change your MAC address with a shell script

For a while, I’ve had notes from Change or Spoof a MAC Address in Windows or OS X saved, so if I am using a wifi connection that limits me to thirty minutes or an hour or whatever, I can “spoof” a new MAC address, and when I re-connect to the wifi, the access point thinks I’m on a new, unique device.

For the record - when I’m posted up at a coffee shop for an extended period of time, I make sure to buy products regularly in payment for my time. So, if you’re spoofing your MAC address to use wifi for a longer period of time, maybe make sure to spend $5 or $10 when you run the script.

Now, in case you think that I’m actually saving myself time here, I’m totally not. Here’s why:

XKCD: Is it worth the time?

Here’s the steps, for someone who’s on a MAC, to spoof your MAC address:

Get your current MAC address # 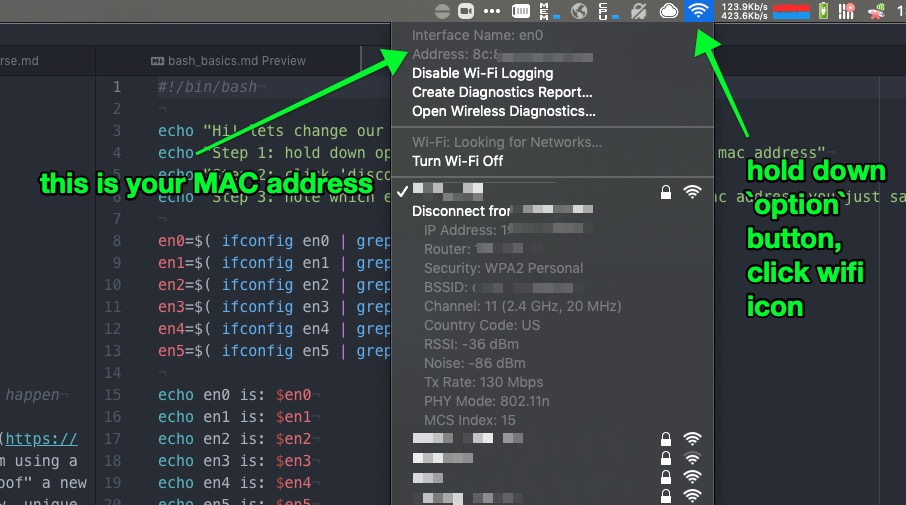 For me, the very first result matched the MAC address I got from option+clicking the wifi network.

That means I’ll be using en0 as the [E]ther[N]et adapter I’ll update shortly.

A MAC address has a standard-looking format.

To generate a random string of characters that produces a valid MAC address, run:

And boom. You’ve got a MAC address.

Now we need to update our current MAC address to this new MAC address.

You can use ifconfig to set the ethernet address (is that interchangable with the MAC address?) to the randomly-generated string you got from the openssl command:

And with that, you can re-connect to the wifi network, and it should recognize you as a new device, and let you onto the network.

Here’s what I first ended up with:

Believe it or not, this script was far from perfect.

First off, not all randomly-generated mac addresses are valid, even though they were passing an online mac address validator I was testing against. AskUbuntu nicely shared what was going on.

I didn’t want to deal with manually building a valid MAC address; I just noticed that about 2 out of 3 attempts to change my mac address, using the above script, the MAC address didn’t change.

So, my next version of this script pulls the generate mac address and set current mac address to generated mac address steps into a function, and keeps calling the function until the mac address has changed.

Why be elegant and precise when you can brute force a crappy solution?

and this seems to work pretty well: 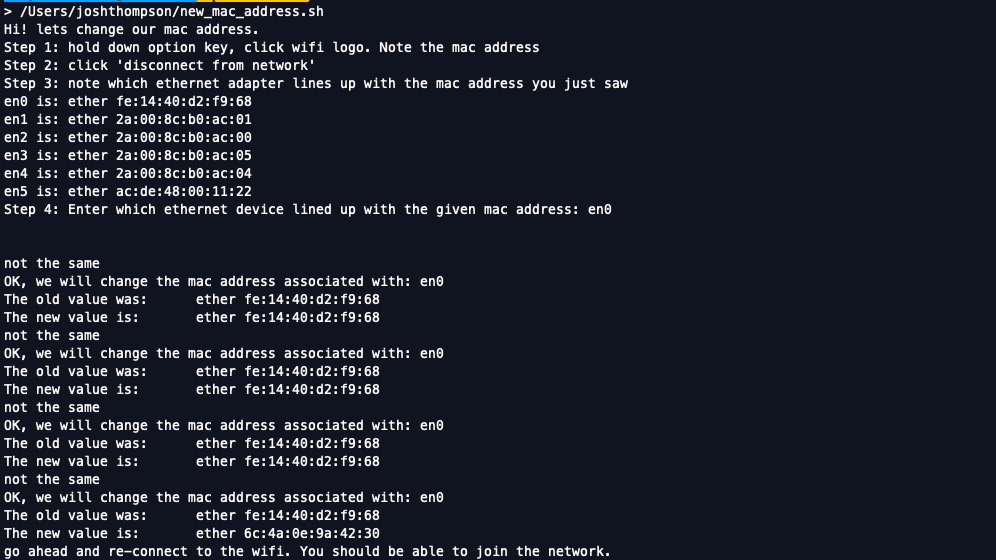 I hope that in the near future, I’ll look at this bash script and have many ways to improve it. For now, it’ll do the trick.

Following this tweet by @serent, I updated the script a little. To generate a valid MAC address:

There’s other pain points in the script. I’ll fix them at some point.