A few months ago, I visited Asheville, NC. It’s a nice town, and has a great pedestrian life, as far as I can tell.

As a thought experiment, I decided to see how well I could make the case for reducing the road width of a few streets.

The reasons are simple - wide roads are hard to cross by pedestrians, encourage faster driving, and are (as I’m going to try to prove) bad for cities.

It’s common for “walkable” streets to have two wide lanes traffic (one each way) plus a lane for parking on each side, plus, perhaps, one or two bicycle lanes, and perhaps a small buffer between traffic going each way.

This seems like a tolerable idea, except it means all of a sudden your little road is difficult to cross. 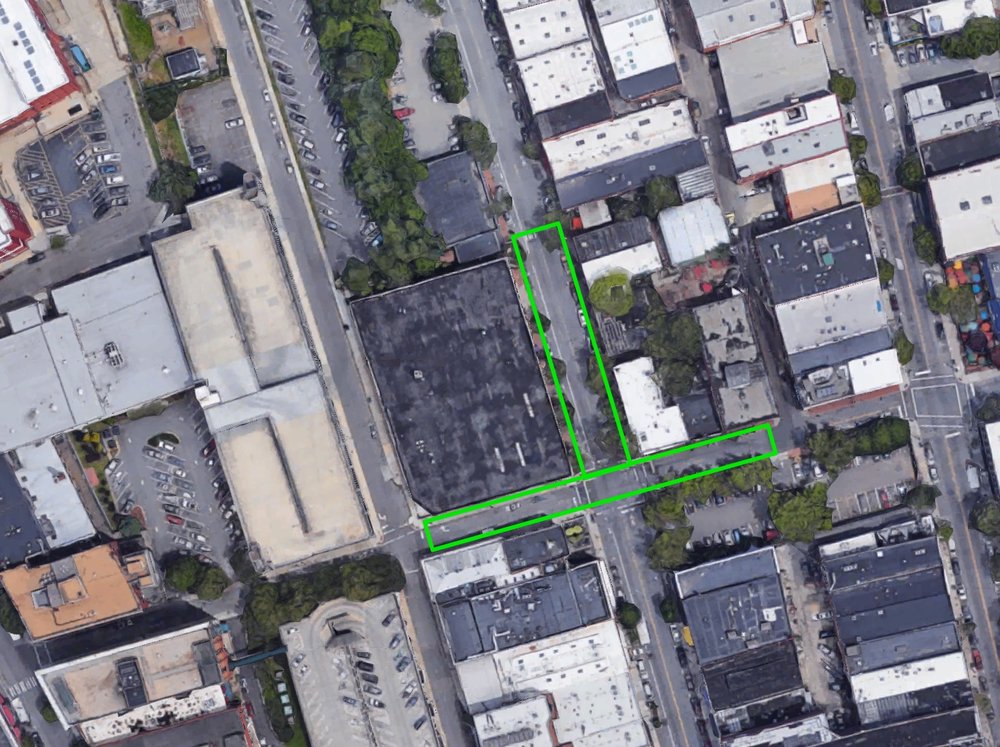 Pictures are of these streets

There’s a few lenses that you can evaluate these streets for:

Lets take a quick stab at each of these:

This street/road is very drivable. Here’s the intersection looking north: 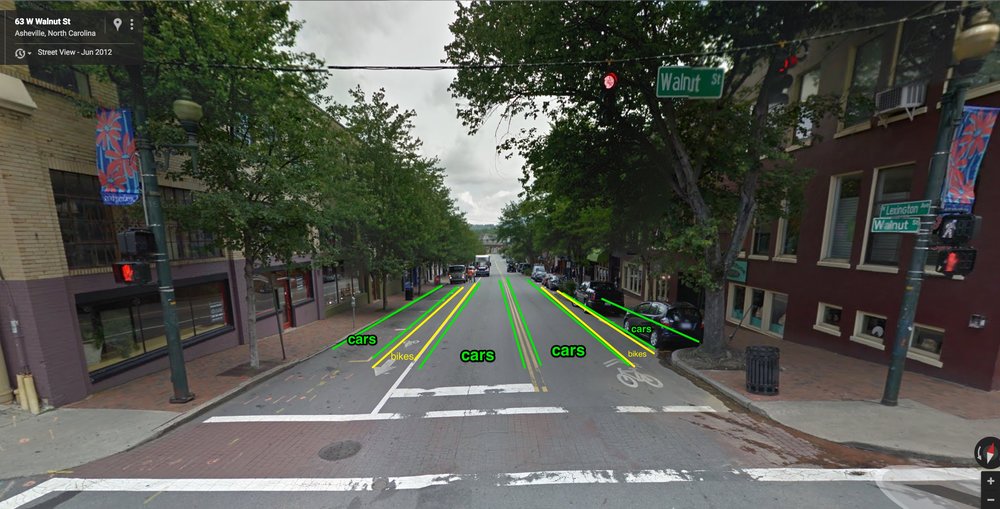 green for cars, yellow for bikes

The speed limit is, I believe, 20 MPH. It’s on a similar looking street two blocks over.

Parking seems pretty easy, too. I’m going to make a case for eliminating the on-street parking, so here’s all of the off-street parking available: 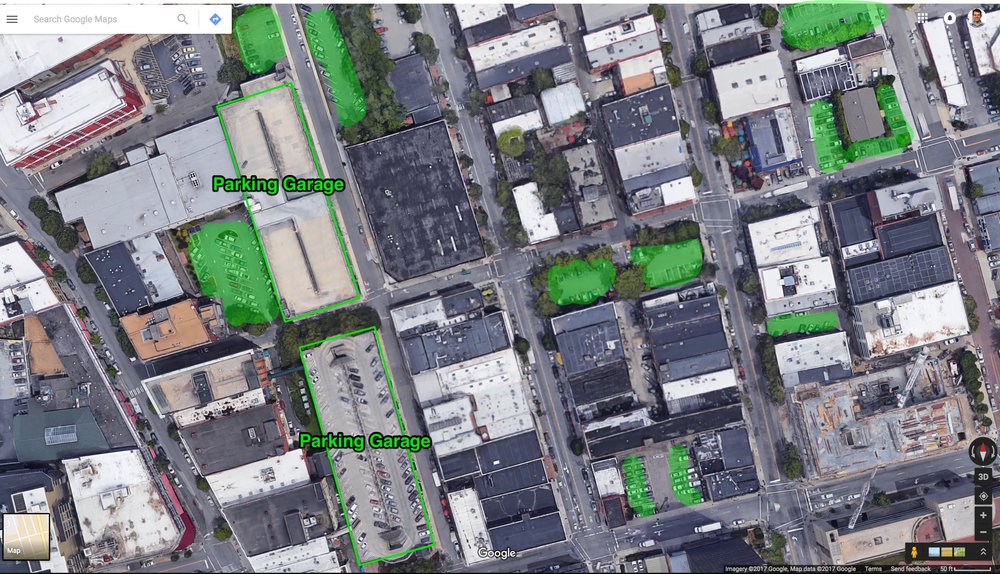 surface lots and parking garages within about two blocks

Each of those parking garages is six stories high.

Now, there is tons of space allocated on the street to parked cars, but that has two problems:

At almost 45 feet wide, this street takes quite a while to cross.

Since this is a walkable street with lots of shops, we would expect people to cross regularly.

A slow-walking person (elderly person, child, or regular person with a stroller) would take 10 seconds to cross this entire street.

The painful thing is, though, about half of the width of the street is low-value or wasted space.

There’s a bike lane, which is required because the street traffic is expected to go much faster than bikes. At a twenty-mile-an-hour speed limit, this shows that the road is expected to primarily serve drivers passing through.

For cyclists, a reasonable average speed is 11 mph. If all drivers actually drive the posted speed limit, it would be pretty easy to share the road with someone traveling 11 mph on a bike. At 30 mph, though, it becomes dangerous for the cyclist to have to survive in the same space as a driver.

A bike lane solves the wrong problem, and in some cases makes it worse.

A speed limit sign is an inappropriate method to limit vehicle speeds. It treats the symptom, rather than the cause. Study after study has shown that traffic flows at safe speeds given road conditions. If traffic is “too fast”, the road is too wide and too straight, or is too close to pedestrians that don’t handle large chunks of metal flying around.

So, if you want people to go slower, reduce the space this vehicle has to drive.

Pedestrians (or “people” as I’ll refer to them for the rest of this post) have different interests than drivers.

People are best served by fractal and dense cityscapes. This means that in the course of walking a block, or a quarter mile, a person will encounter a range of services and shops. If a person has to walk 200 yards between points of interest, they’re going to visit those places less, and they are more likely to visit that place in a car.

A 45 foot wide road is not pedestrian-friendly. Traffic moves quickly, and if you want to cross the street you have to either stand between parked cars as you wait for a break in traffic, or you have to travel to a crosswalk, which is a hassle.

a narrow road, fine for drivers but good for people

A city (government) wants things that make itself money while also keeping it’s constituents peaceful. I suspect that the most persuasive case that could be made to a city planner is “plan A, for which I advocate, will result in a larger addition to the tax base than plan B, which I oppose.”

All else being equal, the more profitable option will win. Nothing else is equal, of course, and there are many influences advocating for different plans.

Most money for infrastructure comes from the federal government, so the easiest way to bring $10mm in to your city is to sign up for a big project and fund 20% of the project. The federal/state government will provide the other 80%.

This dynamic is dangerous and perverse. That’s how you get city governments spending money they don’t have to build infrastructure they don’t need, without having a tax base to support the ongoing maintenance of this infrastructure.

If you’re building new construction (or considering buying a parcel of land), you need to consider how people are going to visit your business. Will you get foot traffic, or vehicle traffic?

If you’re aiming for vehicle traffic, do you need an on-site parking lot, or is there suitable parking near enough to your store that you can avoid building a parking lot?

If I had a store on Walnut or Lexington Ave in Asheville, I’d expect walk-in traffic, and I would NOT plan on building a parking lot. Look at the available off-street parking in the area. There’s plenty available. Furthermore, I would want to maximize the space available to me to generate revenue.

If I had a restaurant, I’d want space for tables. If I had a store, I’d want the biggest retail area. If I were building things, I’d want as much space for my workshop + display area.

All of these desires would result in my maximizing the footprint of usable space to me.

A parking lot flies in the face of this need.

Here’s a better treatment of why small, dense lots will always be healthier and out-perform auto-oriented businesses: The Cost of Auto Orientation

Why this matters to me #

I’ve been noodling on this idea for a while. A while back I read Why Suburbia Sucks, and about that time I stumbled across StrongTowns. My wife and I spent about six months outside the USA, across the Americas and Europe, and I got to thinking why almost every environment I’ve ever lived in has been universally distasteful to me.

Turns out that cities oriented for cars and not people are not pleasant places to live.

I want to live in a place that is pleasing to me, and I believe cities and towns can create environments that are not hostile to this act of creation. And, of course, as one block fills with a dense and fractal mix of uses, the next one over will do the same. Ironically, the general vibe of trailer parks has immense appeal to me. Most of us raise our nose at trailer parks, and go about making it even more difficult for this kind of dense urbanism to be built.

I’m priced out of every market I would want to live in right now. This is because of bad policy, not supply and demand. Here’s how to build and buy a $50k property in San Francisco

I feel like the thing that I want doesn’t exist in most of America, and I want it to. Further, I believe small, dense, self-sufficient urban areas can be financially self-sufficient, which will matter if the massive stream of money from the federal government ever slows down.

Even more tactically, I really like Golden. But it’s succumbing to the same influences the rest of American towns are. I want to push back against that negative influence here, so that Golden can become an affordable place for normal people. (It’s not affordable to purchase property in Golden right now.)

Here’s some of the parking madness that is in Golden right now: 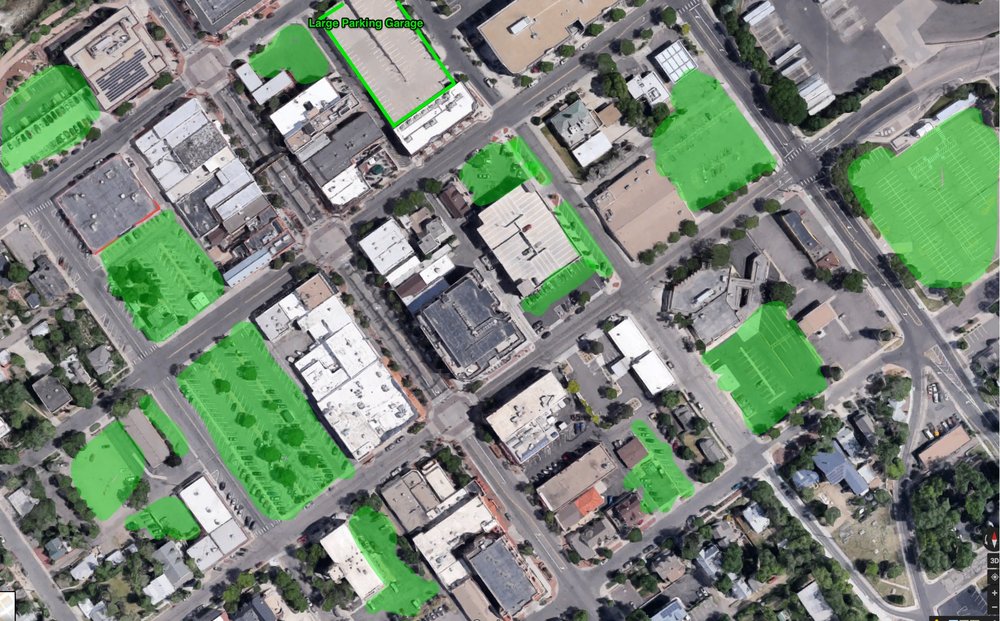 Phew. That was a brain dump. I write to help organize my own thinking, and this has moved me in that direction, despite how disorganized all the proceeding words were.