I was describing this two or three stage plan to a friend the other day. They almost understood it, but since they don’t live in Golden, and have not spent a lot of their life nerding out on “urban mobility infrastructure”, they didn’t quite get it.

Since I’m trying to write things quickly, or at least now, I’m doing a quick little visual of what I wanted to propose to the involved parties.

I think there are three institutions that, if working together in interesting ways, could build a very interesting piece of infrastructure:

School of Mines could create a streetcar/urban-mobility-infrastructure addition to their curriculum, and start getting students involved with (and, as soon as possible, in charge of) planning, designing, building, and operating a growing streetcar network.

Some of the second-order effects of a streetcar network #

I’ll make that a graph at some point.

Read How Seattle Killed Micro-Housing, and imagine how well streetcars in Golden would pair with micro housing.

It’s impossible to say that housing would remain unaffordable. It would let the children of long-time Golden residents live in Golden, etc.

First, emotionally, I think it helps to recognize that Denver (and Golden) used to have TONS of streetcar and rail travel. For example:

Here’s a picture of a streetcar in Denver about 100 years ago, from this excellent article about The History of Denver’s Streetcars and Their Routes: 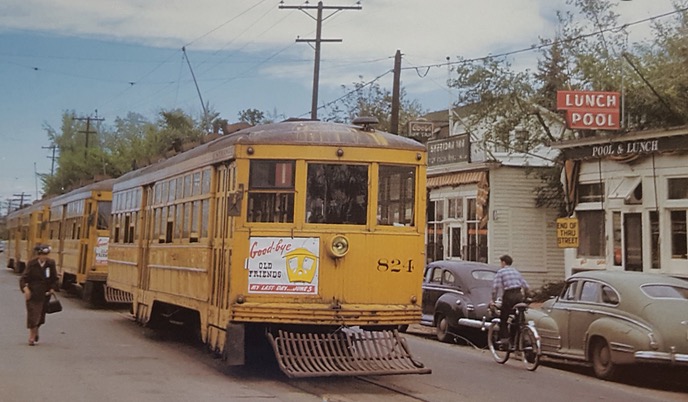 The steps. None of these are small steps, but are within the capacities of one or two people to manage each of the primary constituent steps, and the on-the-ground-help of no more than a dozen workers at a single time.

Here’s what could be the first streetcar line, connecting an existing heavy rail line 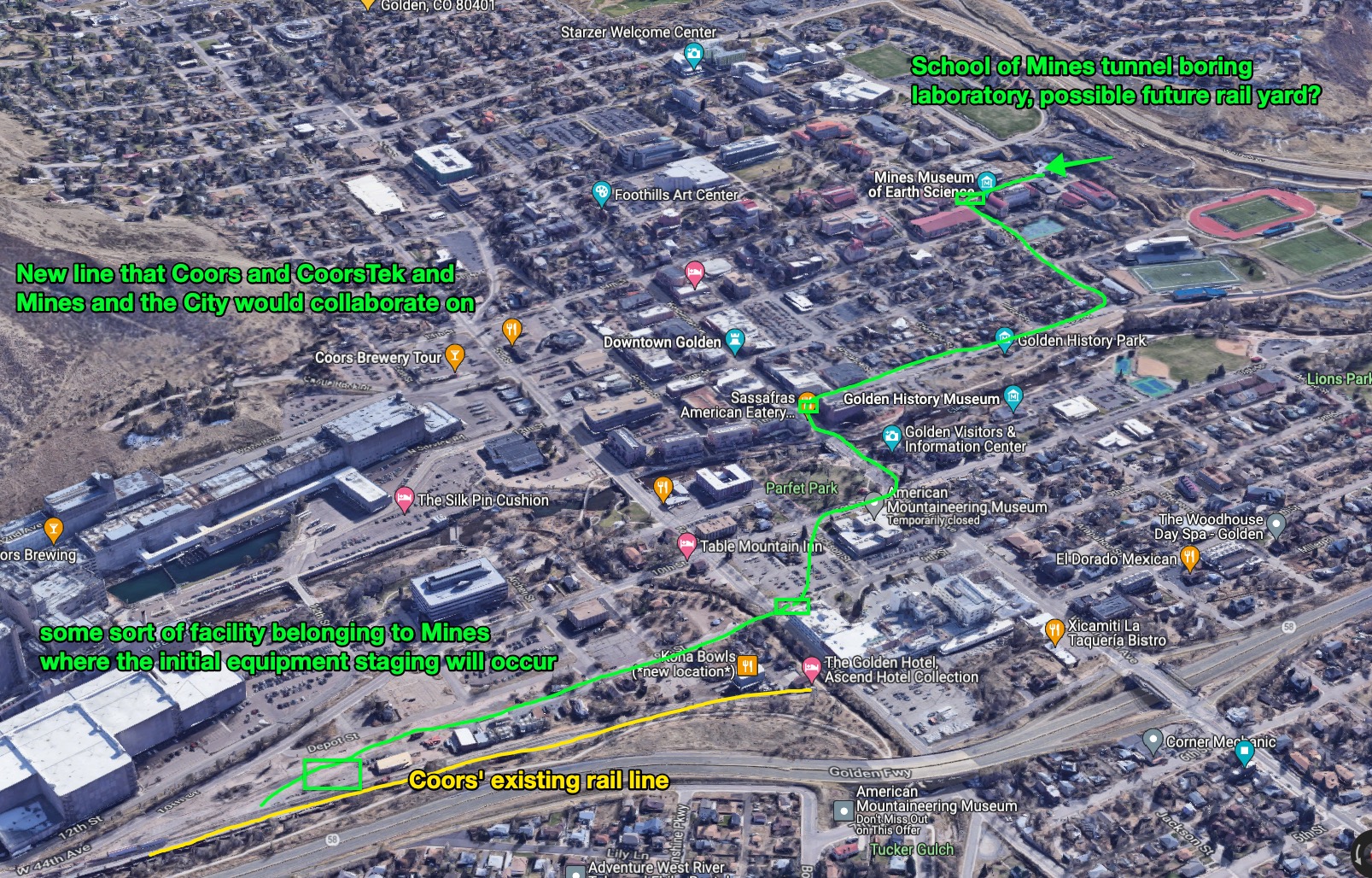 Here’s another possible vision, which would get some streetcar running back through downtown: 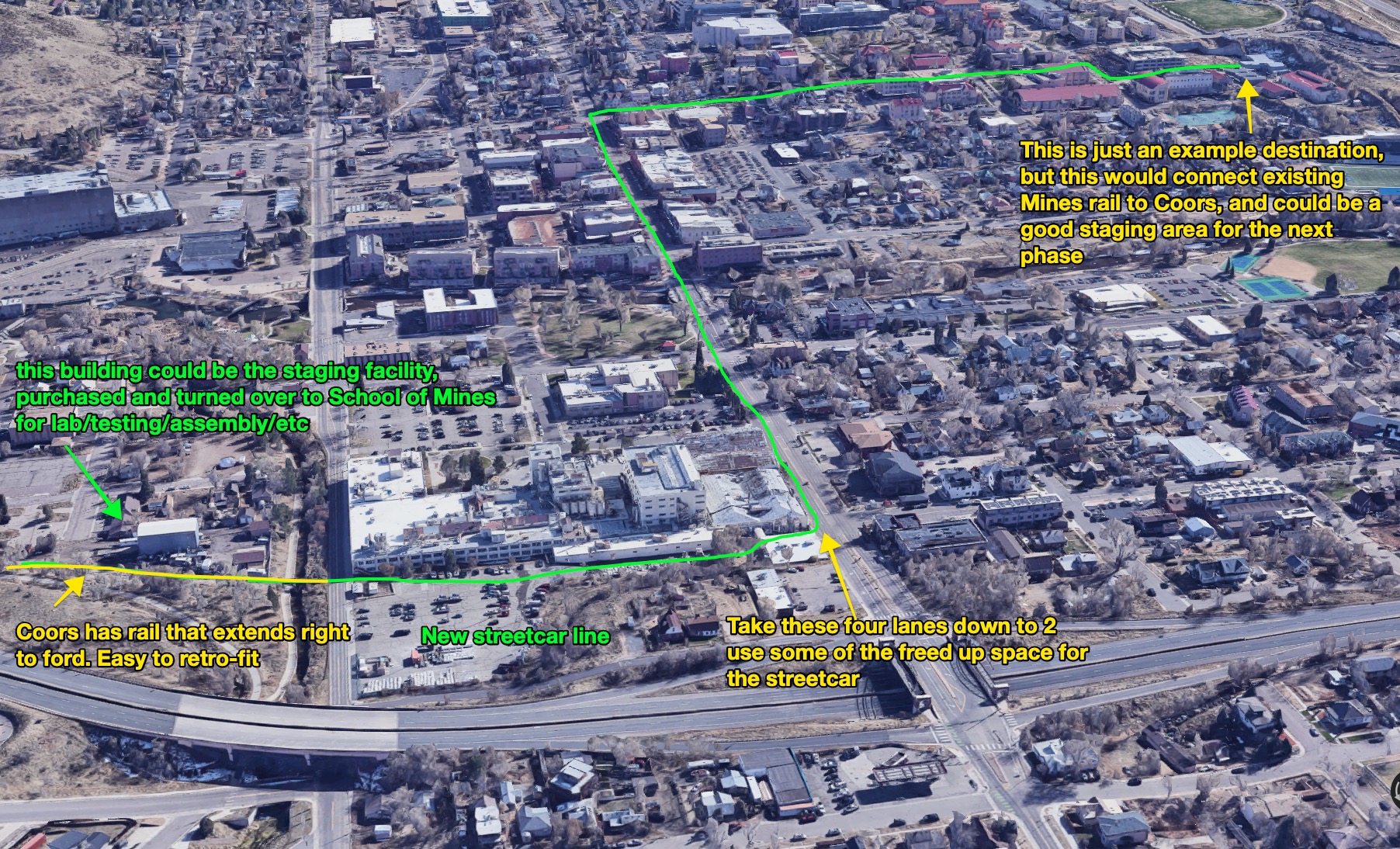 I have a friend that was the #1 steel-seller in Colorado, he’ll get us where we need to go.

Narrow-gauge, because (from wikipedia):

while the steel is shipping, start building the trolleys that would be used to move materials and supplies and equipment along the line as it’s being built. They could be fairly cheap, but again, this is about rapid iteration and experimentation.

Obtain that facility at 809 East St for School of Mines #

rumor has it the owner wants to get rid of it/might be declaring bankruptcy already, because Coors doesn’t need the railcar maintenance facility anymore. Here’s what exists there right now: 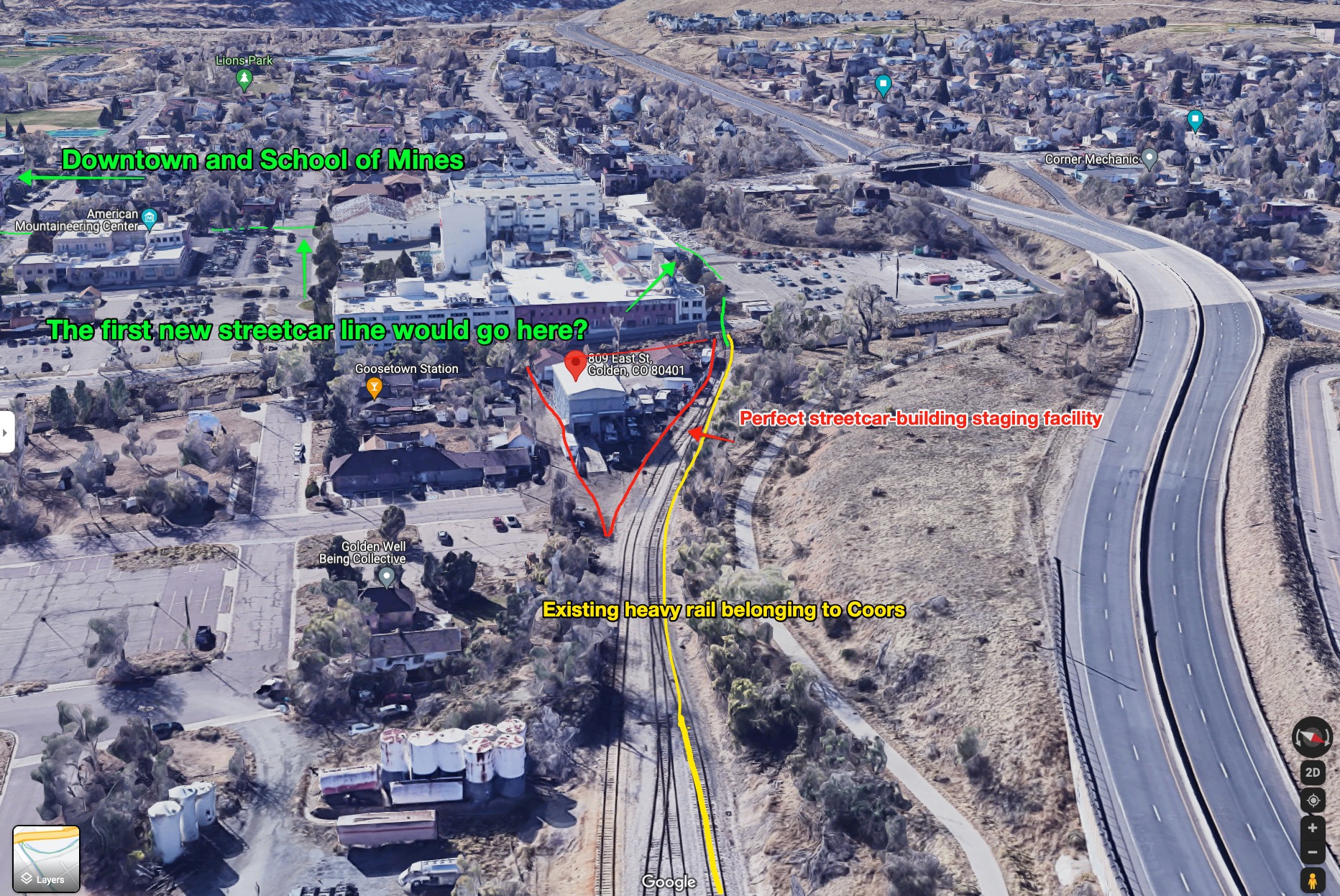 Start getting equipment and letting interested people self-select into the project.

Now to start getting the street car network sorta “mixed into” school of mines space:

Here’s some ideas of where some new lines might be added: 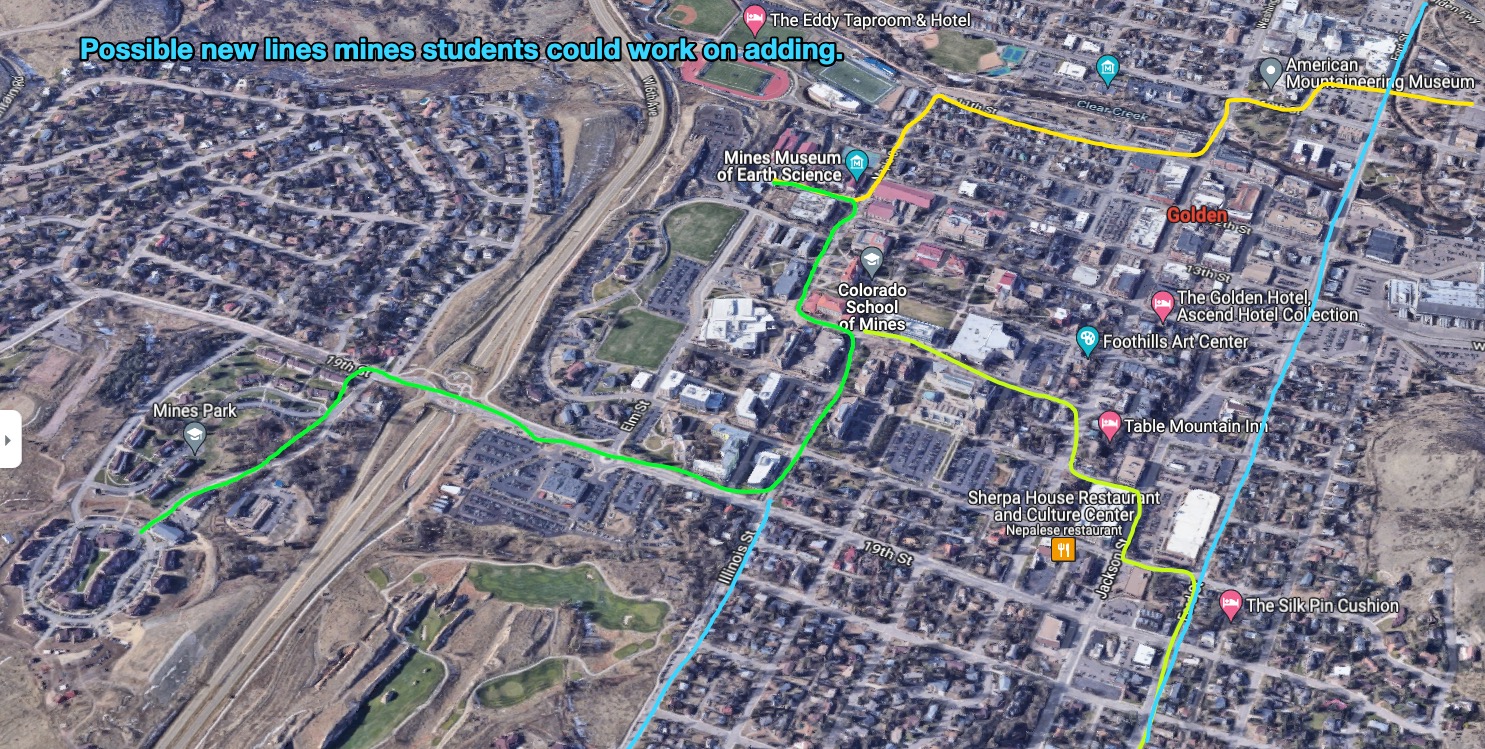 If step 2 looked impossibly huge to you, and like 10x what seems reasonable, I get it. Lets actually dramatically shrink step 2, and instead get Mines to treat it’s entire campus as a bit of a laboratory for this streetcar thing, learning how to operate it, put them up for the night, get them ready for the day, run them, etc.

Maybe Mines will figure out how to make autonomous streetcars, similar to the autonomous busses it drives around. I bet someone there could.

Here’s a much smaller version of building some rail. Obviously these are just ideas, but hopefully you can start seeing how this could lead to a growing body of knowledge and understanding. 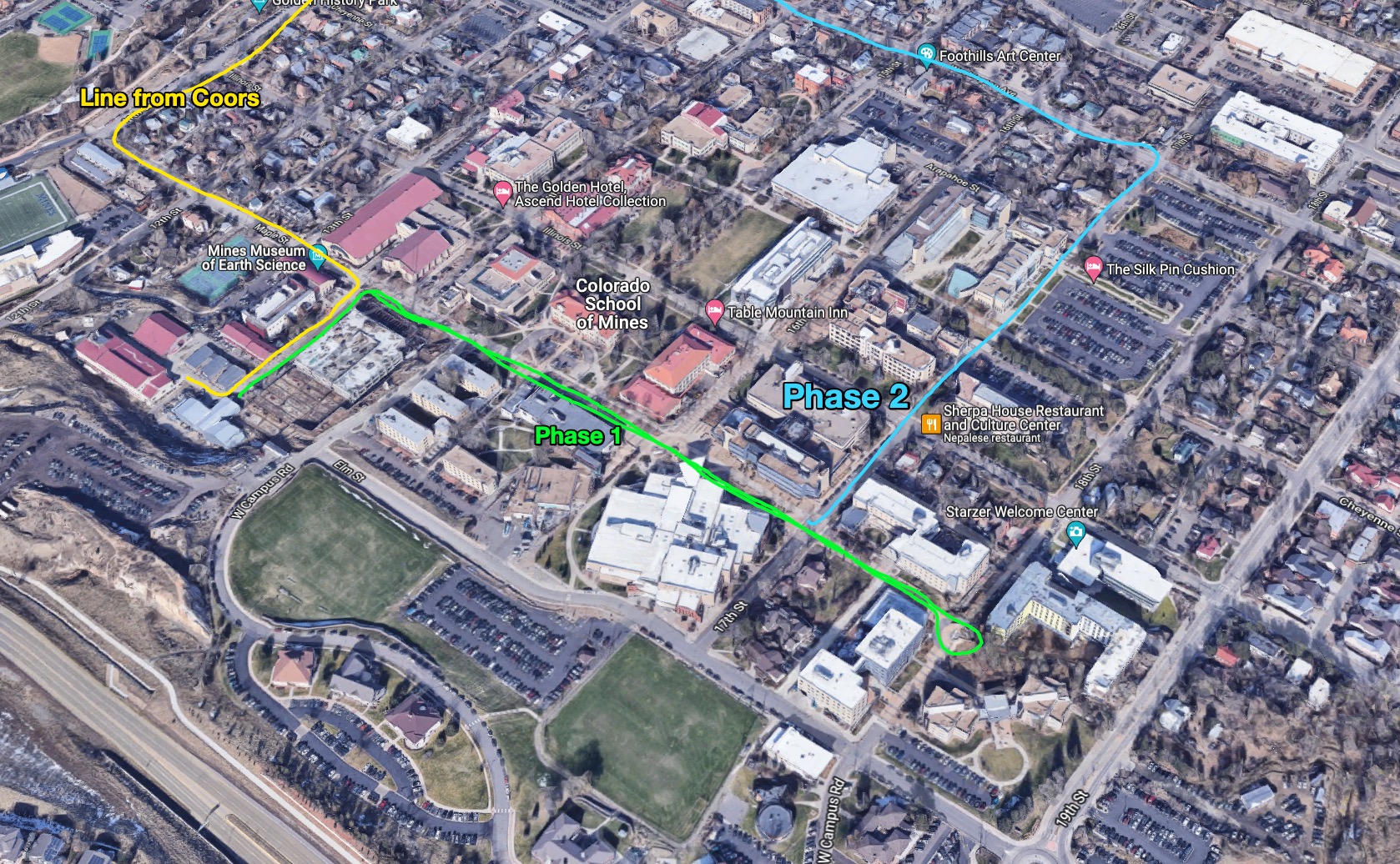 Off the top of the head:

It’s not cheap, but I think one could arrange to purchase the raw materials, turn them over to School of Mines students, support them as much as possible from Coors’ staff (to teach all sorts of stuff), and, in letting the students plan it out and execute it, it would be possible to end up with a functioning screetcar line.

For starters, steel railway. Steel isn’t insanely expensive. I asked a friend who used to do commercial steel sales in Colorado - he would sell the rolls of steel that would be fabricated/worked into other forms, but he’s got lots of good information. Copy/pasting from some emails:

Looks like ASCE (American Society of Civil Engineers) recommend a specific rail for light rail applications after a quick search. The steel is a 900A/1100 steel grade.

There’s lots of different groups that purport to sell this kind of rail. Examples:

One could get the steel and start laying it, while a different group works on the trolleys or the cars that will go on top.

I feel like building it as cheaply as possible, with a goal of maximizing speed-of-learning, would be the prudent option.

I finally downloaded TikTok specifically so I could share this pic.twitter.com/wHZGorDwdp

Like many things, it’s best to click around and load your mind up on examples of this kind of thing done well, and how streetcars might interact with their environment (and vice versa).

For example, because of how accessible streetcars make distances previously considered far away, a certain style of human relationships tend to spring up adjacent to the streetcar line.

These relationships tend to result in a built environment that makes a more ‘intensive’ use of the land.

The I Am A Mayor Who Is Serious About Reducing My Town's Dependence on Fossil Fuels Starter Pack. Inquire within for more details. pic.twitter.com/MaQTSdkmTp

Andy Gammon's view of Lewe's Priory in 1520. Even if you don't build the priory itself it would make a beautiful starting point for a human scaled no-car settlement for a hundred families of craftsmen, food producers and teleworkers. With ample wifi. pic.twitter.com/pU9qvTRaKV