Proofpoint had a two-day “hack day” recently. My coworker John and I teamed up on a cool little feature. I’ll give some context in a moment, but this post isn’t about the hack day, or email - it’s about exploring source code.

We then gather and report data on things like:

One strong benefit of using this tool is our customers can send their employees very realistic, very tricky phish, and educate them how to avoid falling for those tricky phish “in the wild”.

The more realistic the phish, the higher-quality the training.

So, we wanted to set up an email inbox that our customers could forward real-life phish to, and our staff could look through all the submitted phish, preview the email, and decide to convert the real phish into a simulated phishing template available in our “phishing template library”.

Basically, if you got a really sneaky phish, you could forward it to phishingideas@proofpoint.com, and we could quickly decide if we wanted to make this phishing template available to all our customers.

I’d heard this idea discussed before, always as a “nice-to-have”, but the feature ticket never got written, and we never prioritized it. John and I work closely with the Director of Support, and others, and when digging into their pain-points, they also said this would be a nice feature.

So, we decided to build it!

We still have to set up some SMTP stuff in Mailgun, and do a few other bits of configuration, but the actual rails app is functioning as expected, and can receive mail passed along from Mailgun.

I’m not writing about receiving mail in a Rails app, though - that’ll be another post. But at one point, John and I got pretty bogged down with some unexpected errors.

It wasn’t until we started exploring the source code of the gem generating the errors that we found the problem.

Had we been quicker to jump into the gem source code, we would have saved ourselves three hours, and maybe would have gotten the entire feature built and up for testing in the time-frame we had.

Recently I’ve been making it a habit to explore stack traces when I get them, because when they pop up in my terminal, it’s super easy to view the source of the problem.

So, here’s the error we were getting: 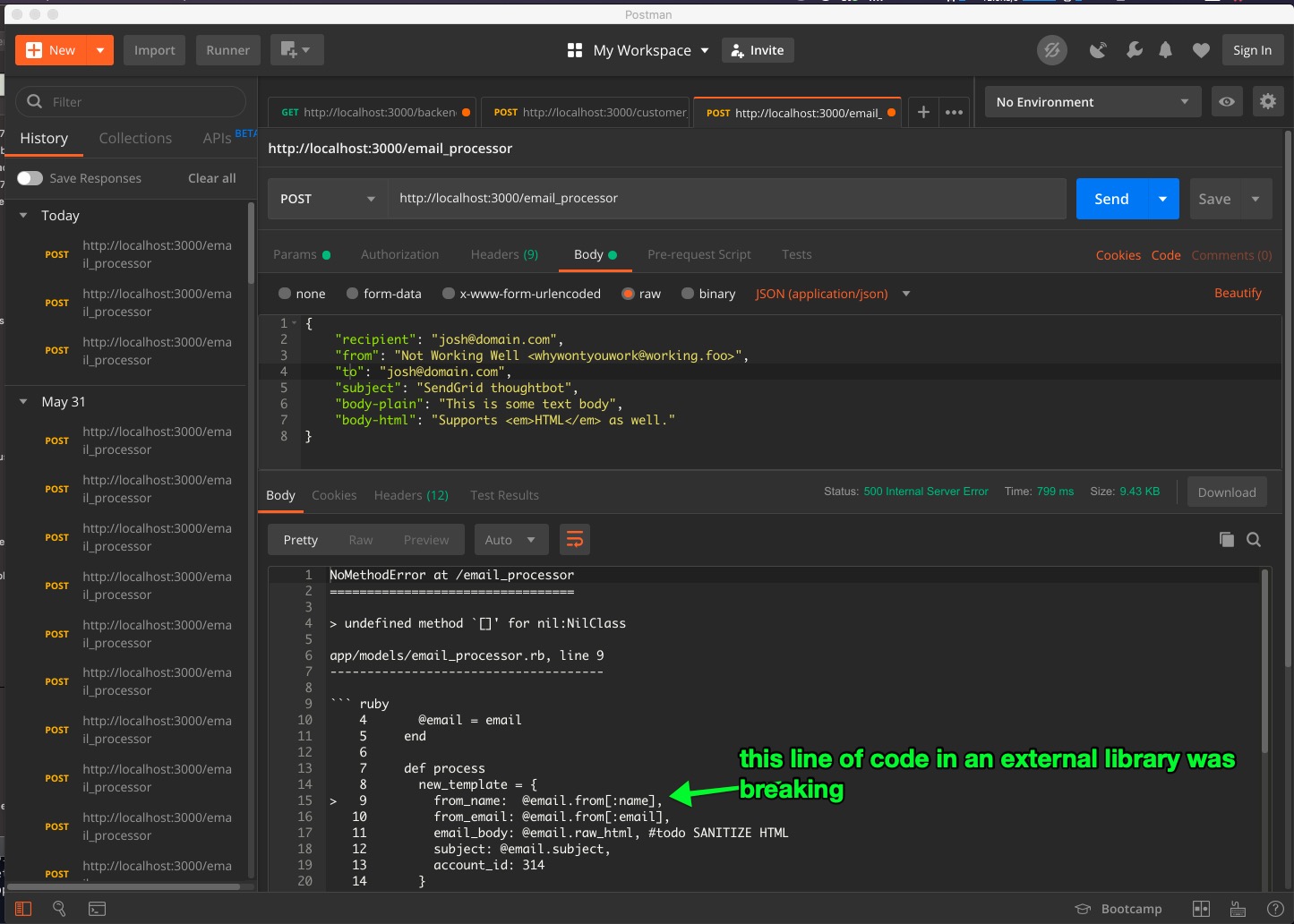 Our code was causing the stack trace when we called @email.from[:name].

But we couldn’t figure out exactly what the problem was. We were using the griddler-mailgun gem (docs), and it seemed like we were running everything right.

We followed the ThoughtBot setup instructions.

We could not figure out the problem.

I finally thought we should explore the gem source code, but I didn’t want to just click around the source code on GitHub. After all, the exact line this thing broke on isn’t super helpful. You can go see it yourself: https://github.com/thoughtbot/griddler/blob/master/app/controllers/griddler/emails_controller.rb#L23.

I knew there was a way to quickly open up a gem. I couldn’t remember what it was.

Googling how to open ruby gem source code locally (or something like that) led straight to a StackOverflow question: Viewing a Gem’s Source Code

One of the answers worked perfectly for us:

Since I use Atom and I wanted to see the gridder gem, I ran:

Boom. I could see the code. I can even put a pry in it! 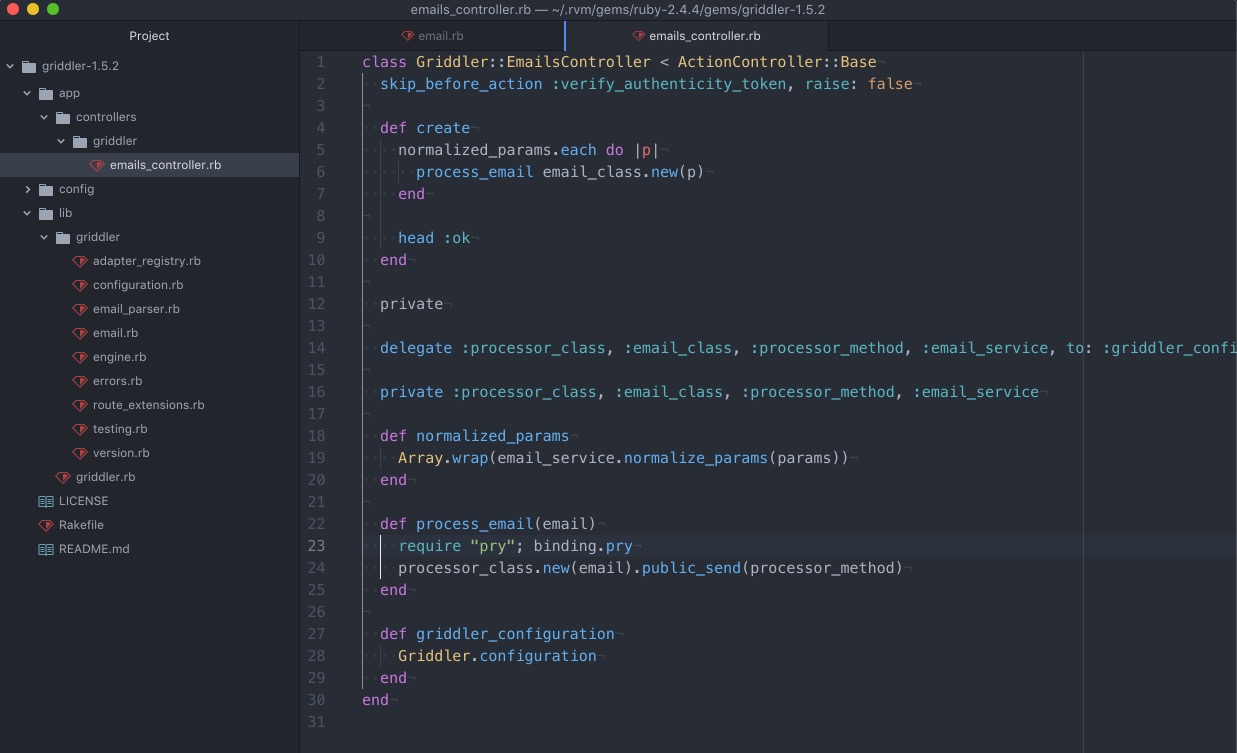 When I re-ran the POST request from Postman, with rails s running in my terminal:

I won’t bore you with the details, but by investigating the state of the email object being passed to processor_class.new, we could see that email already was missing params.

So, I kept digging. Where was the email getting processed? Where was this params object coming from?

So, I got to open another gem in the editor. :)

Here’s what we found: 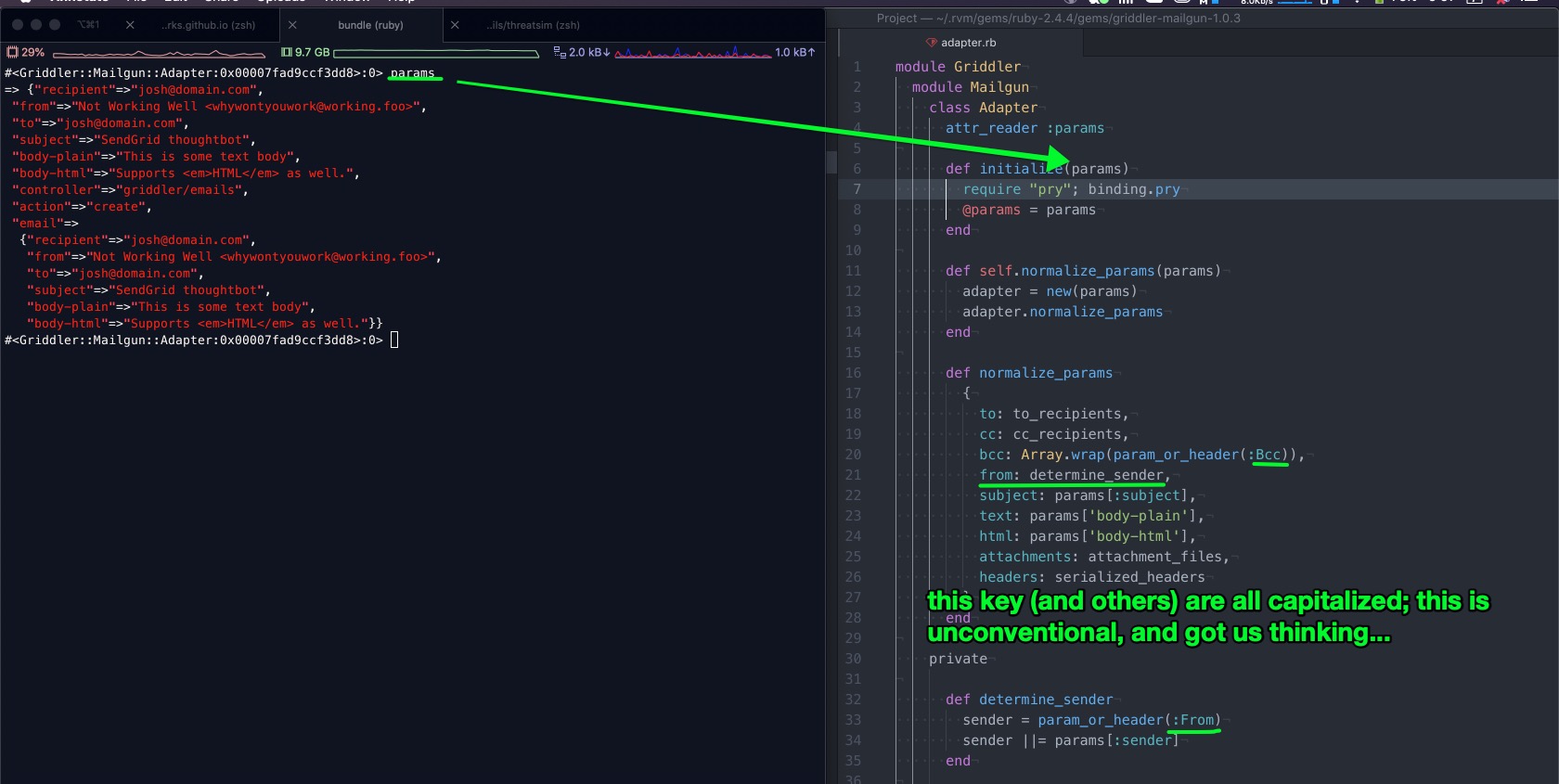 It seems odd that these keys were capitalized. In ruby ,:From is not the same as :from.

So, we updated our params that we were passing in from Postman, to capitalize a few keys:

Notice the capitalized From and To.

And it worked. Now we had the email in our application.

This cost us almost three hours of frustration. Once we started digging into the gem itself, we were unblocked in thirty minutes.

I’m going to make a PR against the griddler and griddler-mailgun repositories soon, with a note in the documentation on this convention; maybe everyone who uses these tools knows that the From key has to be capitalized, but we sure didn’t. There’s one open issue from 2017 where someone else ran into the same problem. I’ve shared this solution there, but that’s not a great way to surface the fix for everyone to see.

update: I’ve got a README update PR in on griddler-mailgun.

But the big learning for me was… how to quickly open a gem for further investigation. And you can even stick a pry in it to trace around execution!

There’s more than one way to get at this. You can use gem open, as per the gem docs. You can specify a gem version to open, as it’s common to have more than one version of a gem installed on your machine.

I’ll absolutely be using this general pattern much more now to dig into source code. This has the ancillary benefit of exposing me to lots of well-written code; supposedly, to write better code, one ought to spend time reading good code.

Now there’s less friction between me (and you!) and reading good code.