I don’t know how to cook. Period. My most impressive culinary creations were, until recently, spaghetti and beans-n-rice. I got married about a year ago, and had hoped that I would become inspired to become a world-class chef. After a long time eating Rice-A-Roni, spaghetti, sloppy joes, burgers, and anything that can be prepared in a crock pot, I was looking for a change, and this has been a priority for a while.more

Enter Tim Ferriss’s The 4-Hour Chef. Among many other things in the book, he has a prescribed set of recipes to follow. In each recipe, he builds on skills, tools, and ingredients used in the prior recipe. His aim with each meal is maximum impact in taste and appearance, but minimum effort and cleanup. This resonates with me, because he speaks in terms of Return on Investment (in terms of money, time, and effort.)

Most importantly, once you have the book, you don’t need any other resources. You’ll need some basic tools, but he spells out all the processes the first time he introduces them.

I will record my trip through his book, and identify any hiccups along the way. I hope, in addition to cataloging my own successes and failures, I can inspire one or two of #

you to give this a shot.

The first lesson is braised lamb. What is a  braised anything?

Braisingis a combination cooking method using both moist and dry heat; typically the food is first seared at a high temperature and then finished in a covered pot with a variable amount of liquid, resulting in a particular flavor.

For this lesson, we (Tim and I, of course.) skipped the searing. It’s easier this way, and still comes out great.

There are two critical ingredients to Osso Buko. First, the meat. I was supposed to have lamb shanks. Where the heck do you get lamb shanks? I went to a local Giant and poked around their meat department for a while, and could find nothing that looked like what Tim had in his book. 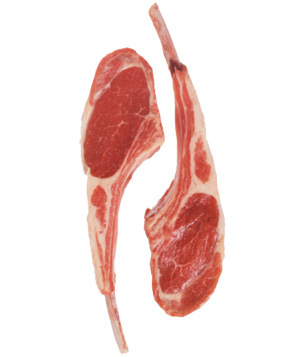 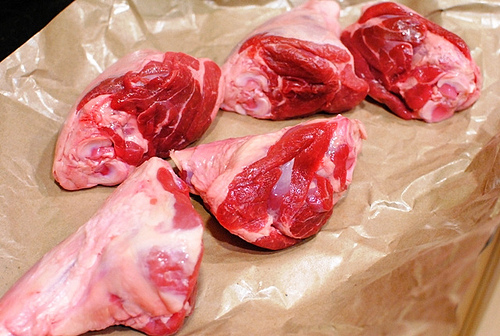 Since I was cooking for three later that evening, I just grabbed meat that said “lamb” on it, and also had visible bone. Turns out I had gotten lamb chops. Oh well.

I had my meat. What was the other critical ingredient? Not an ingredient, per se, but a tool. I had to use a cast-iron dutch oven. I’ve never owned anything cast iron, and there was no cast iron cook wear in my house growing up. My uncle introduced me to it when I lived in his basement after I finished college; he is an excellent cook, and he swears by the stuff. Since he is a trustworthy source, I did not protest much to the idea of getting a cast iron dutch oven. Especially since this dutch oven by Lodge is both a pot and a skillet. 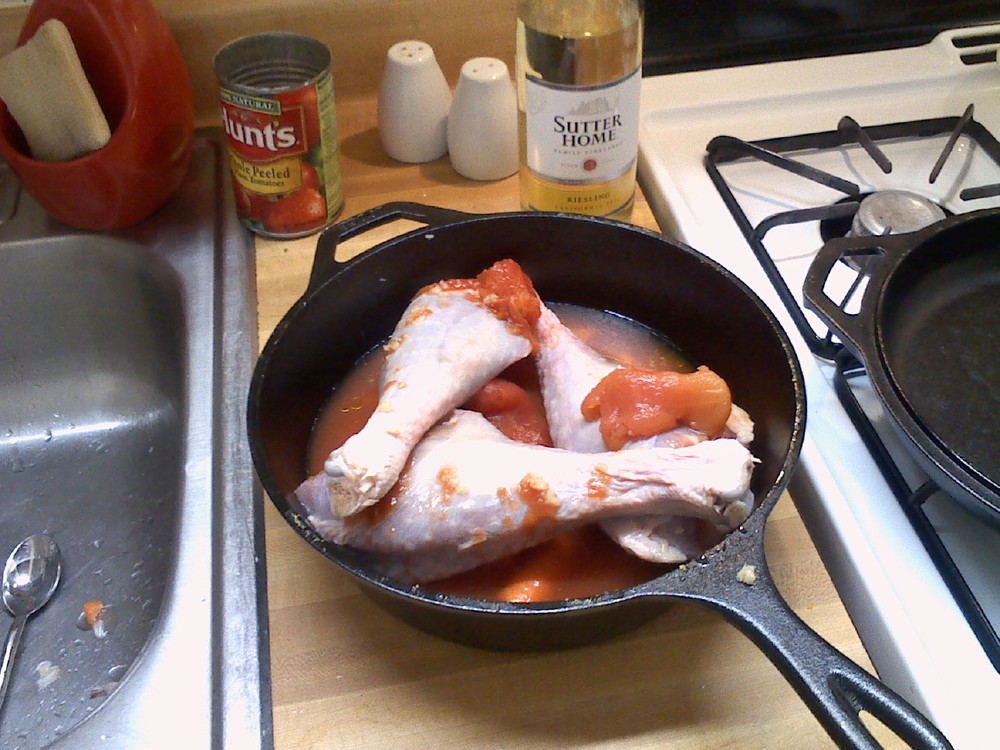 Now that I had my meat and my pot, I put everything in the pot (carrots, lamb, canned whole tomatoes, a little garlic, extra-virgin olive oil, and some white wine) and I stuck it in the oven for two hours. It came out delicious, and tender. Everything was edible, including the carrots and the tomatoes.

Lessons learned: While meals may be simple, it can be a real pain finding the correct ingredients. The chops I got were not at all what I was looking for, but it was the only lamb I could find. If you know where to get good lamb shanks, let me know. 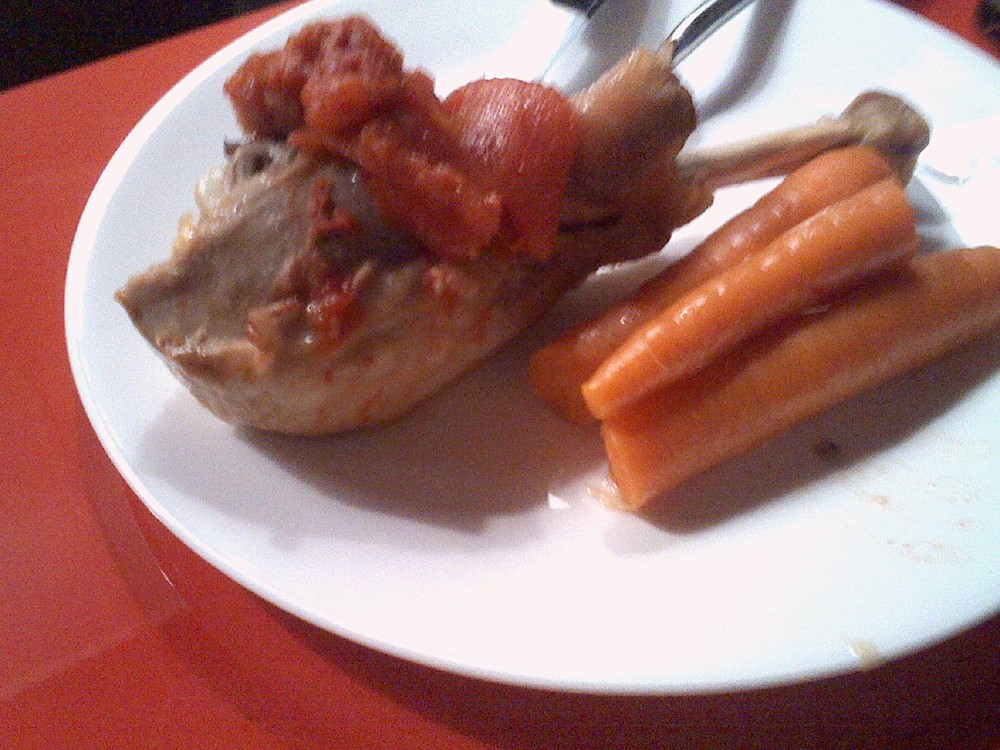 I eventually ended up getting turkey thighs instead of lamb shanks, just so I could have a better idea of how it is supposed to go. It worked out, but I’m not a huge turkey fan, so… I’m going to keep looking for lamb shanks.

Lesson One and a Half: Chuck Roast

The very next page, after the Ossu Buko, was a variation of braising using just a chuck roast, and three different cans of broth. Put everything together in the pot, and bake for 2.5 hours. Seriously. That easy. It was delicious. And there was lots of left overs. 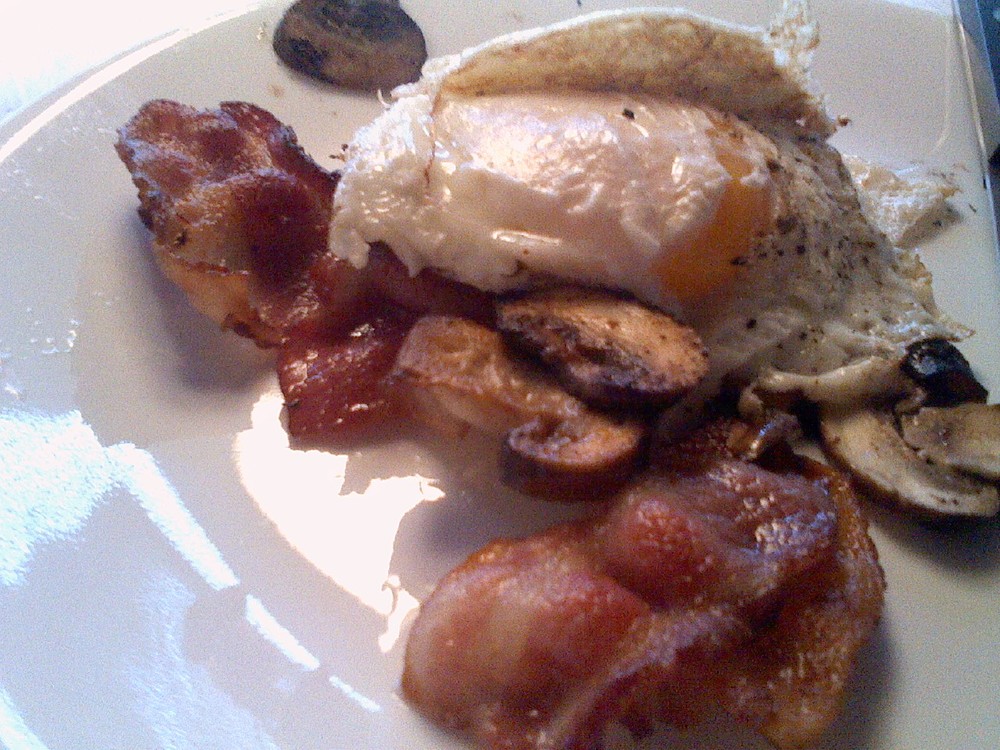 I’ve been eating three eggs and bacon for breakfast every day for at least two years. Repetitive, yes, but healthy (in some circles. Unhealthy in others. Guess which camp I am in?) and easy. I don’t scramble them, I just put ‘em sunny side up and mop the yolks with the bacon.

It was easy to transfer to scrambled eggs. Tim outlines three different ways to make scrambled eggs, and they all three have to do with the ratio of egg whites to egg yolks. He recommends a 2:1 ratio of yolks to whites. This would leave me with a ton of whites, so I’ve been using a 1:1. (In his defense, he has a paragraph labeled “What the hell do I do with these extra egg whites?” The answer is either flip the ratio next time around, make crab cakes, or hair conditioner. Yes, hair conditioner…)

I’m stuck in the rut of sunny-side up eggs and bacon, though, so after a few days of playing around with scrambled eggs, I settled back into my old habits.

Tim lists around the world in 44 flavor combinations as suggestions to get a feel for different cuisines  With just a few basic spices, you can get from Mexico to India to the Middle East to Greece to Hungary and more.

I experimented with scrambled eggs for a few days, but I just love my sunny-side-up eggs cooked in a little bacon grease. It’s quick and easy, and oh-so-filling.

(My last trip to Giant, they had eggs for the cheap. I bought four-and-a-half DOZEN eggs. It lasted about three weeks. Mm, protein.)

This was my first total failure. I screwed up the ingredient ratios, and found out I didn’t have curry (I thought I did) so I unintentionally steamed a bunch of cauliflower that was too hard to mash, yet still soft enough to eat plain; I had cauliflower leftovers for a few days. The upside is cauliflower steamed with coconut milk is delicious, even if it can’t be mashed up like mashed potatoes. For “total failure”, it was no big loss. 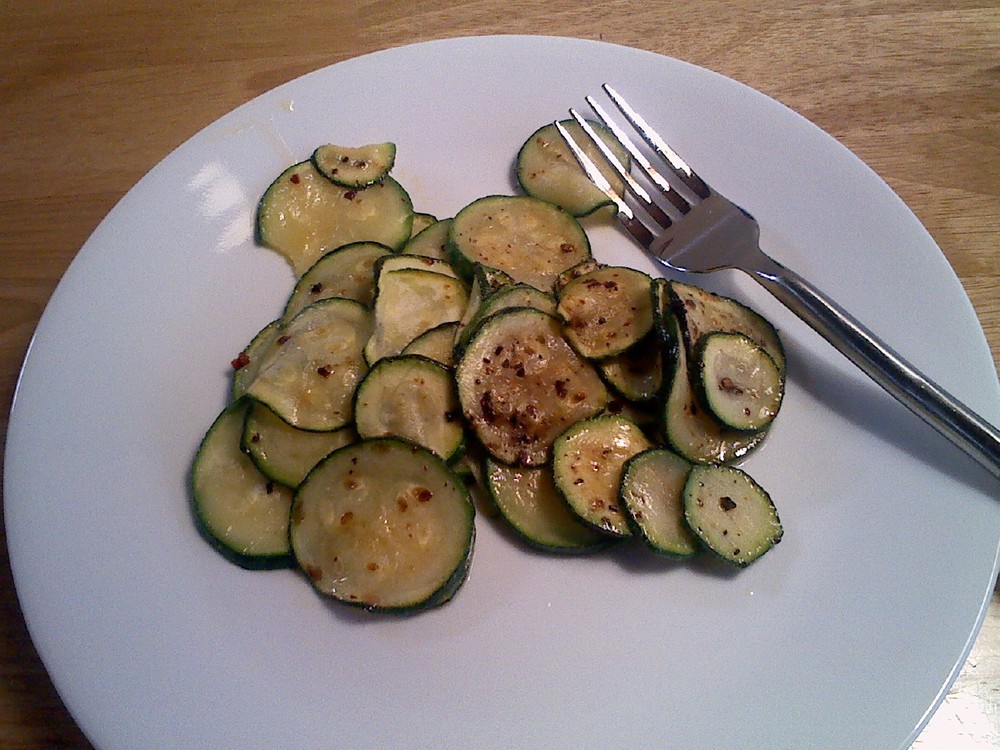 This stuff was delicious!

My biggest challenge for this lesson was finding zucchini! The two local Giants that I visited didn’t have ‘em. Once I found out that zucchini is basically a squash, I had better luck finding it. (Cucumbers, on the other hand, are not interchangeable!) I also did not have the Ghee (clarified butter) or chilli pepper. I used red pepper flakes, instead, and some regular butter.

I peeled the outside of the zucchini before slicing it into thin strips- turns out I didn’t have to do it. Skipping that step will save time, and the peeler I was using wasn’t working so well; I got a better peeler. Between not peeling the outside, and having a good peeler, the prep took about 1/3 as long.

Lessons learned: Zucchini are also called squash. After scouring the world looking for some stinking zucchini, I realized I had found it. Several times. And never even knew it. Again, shopping has proven to be the biggest frustration. The good news is, one can get better at shopping for food. Everything else is easy. This was seriously delicious.

I could not find the necessary baby bok choy, so this was actually just Chinese chicken. I had never steamed meat before, but it’s pretty easy. I started with boneless skinless chicken breasts, cut them in half the long way, and lay them on top of a wire rack above steaming water. Put a lid on top, and pull them off fifteen minutes later.

I was able to get the Bok Choy, and made the sauce more than 20 minutes in advance. It still tasted very good, and it presents very well. (If you want to look like a kick-butt chef, talk about “presenting”. It distracts the guests from the taste of the food, and focuses the attention on the look of the food. This can be a good thing.)

This post represents many, many hours of work. Between reading and trying to figure out what I needed to do and buy, to actually trying to buy the stuff, to cooking and cleaning, a lot of work happened here. But it was worth it. I’m learning my way around a kitchen.

Since eating is a pretty regular part of my life, it is worth it to me to get good at it.

Even when everything seems perfectly clear, there is still plenty of room for questions. Most questions related to ingredient substitution; I don’t have curry powder, so I’ll try red pepper flakes. No ghee? I’ll go without.

I questioned plenty of the cooking processes. Fifteen minutes of cooking over boiling water. Should the water be boiling when I put the meat on, or do I count heating the water as part of the fifteen minutes? (Thank you, probe thermometers…)

I had issues finding all the food that I needed for the meals. I never shopped for more than one meal at a time, even though this meant lots of trips to the store. At the time, I had plenty of time to go to Giant, so my struggle with batching grocery runs was not overly problematic.

Fear of failure can be overpowering. I didn’t want to mess these up. It helped that my wife, Kristi, would often make a side, like mashed potatoes or microwaved corn. That took some of the pressure of failure off me. All the fear of failure was entirely self-generated. And Tara Thai is right down the street. And they deliver. If it all does totally hit the fan, just order some take out. Consider it an inexpensive and very local cooking class, and you learned something that does not work. Failure is not so bad.

Shopping is an important part of cooking. I never expected shopping to be so hard. I now realize that I must mentally equip myself to go into the store and come out with what I need. There are thousands of choices, and it’s painful walking the entire store looking for one stupid item that you  know they have.