Everyone is aware that change is good, even necessary, but given the rate of failed attempts to implement new habits, it’s harder to implement than to plan. I’ve spent the last few months slowly learning about how to get better at the implementation side of things - thus far, I’m not too good at it, but I’ve been learning a lot along the way, and I have very high hopes for the future. I’m going to try to explain how I see the relationship between habit building, will-power/motivation, and self-evaluation. This could be lengthy - it’s probably not for everyone - but I hope it will be helpful to some.

A traditional understanding of habit building is thus: “If you can do it for 30 days, it’s a habit, so just push through that month, and you’re good to go.”

I have no idea if this is true - I’ve tried to reach that magical 30 day mark a number of times and have never been able to do it. I’ve tried with various forms of exercise, waking up early (that attempt was a joke. I woke up early zero times), modifying spending habits, writing, flossing, cooking, reading, and probably a dozen other attempts.

Not only did I not reach the 30 day mark, but my attempts were comically short-lived, but not for lack of effort or desire. From my attempts to wake up early (didn’t happen once, and I’ve tried a lot of times) to my attempts to floss (it worked great, until I forgot completely to even try to make it a habit), I’ve had almost zero success at intentionally creating habits.

Now, how much success have I had unintentionally creating habits? I’ve achieved a 100% success rate, without even trying! Some habits are good, and others are bad, but just about every habit I have has spontaneously arisen. And I run my life by habit - far more than I like to consider.

Habits are a lot like instincts - it’s what we do without thinking about it. If someone raises their hand to slap you, you cringe, or put your hands up, or fall in a heap on the floor. All without thinking. Instincts can save your life or kill you, just like habits. By examining how our current habits have arisen, we can learn how to take control of that process for our own benefit.

Willpower - Never there when you really want it #

Forget natural gas, coal, water, or cute baby seals - willpower is man’s most important resource, and it is in awful short supply. We (mankind) used to think that those who got a lot done had more self-control, or willpower, or discipline, or motivation, or whatever. That seems to be the inescapable conclusion of this video. Or, if you’re into climbing, this video may be motivating.

Here’s the point of both videos: When the video finishes, don’t you feel like you want to go out and work really, really hard? The path seems clear, and it’s marked by blood, sweat, and tears - it fits with out perspective of how this sort of success is achieved.

These stories makes sense, right? If we want something, we’ll work hard for it. If we’re motivated, we’ll push through. If we psych ourselves up enough, and get angry, we’ll ignore our weaker self who’s begging for rest, food, and socialization - you know, all that useless stuff.

It all makes sense, except it is dangerously wrong. 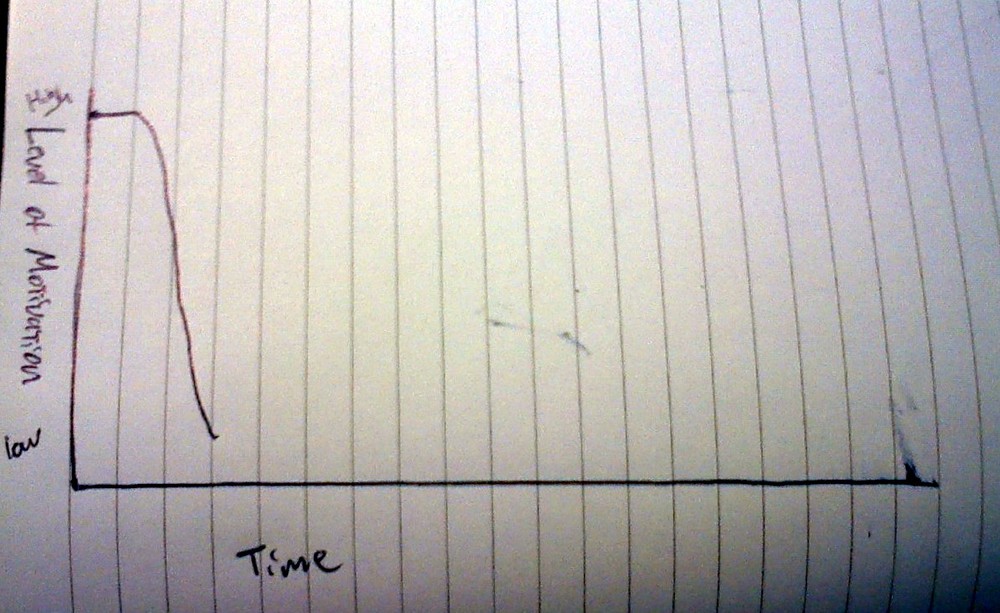 Most people start a new project starry-eyed and excited. No shame there, of course. We humans usually don’t try to do things without some sort of good reason.

Unfortunately, if your motivation is very, very high, there is only one direction it can go. Down. Way down. Please note how that line in the graph (X-axis is time. Y-axis is motivation) plunges, then ceases to exist.

Humans are meaning-makers. This means we find meaning  everywhere, and we often make our next choices based on what’s recently happened. If your motivation evaporated, you want to stop trying. Trying is now making you miserable instead of motivated. You don’t want to be miserable, right? The whole reason for trying this new thing was to be in a better place than you are now. So, you rightfully stop trying.

After repeating this frustrating cycle a few more times, you have decided that you are simply not a person who can make new habits/do hard things/change your own course in life/ignore the status quo. There are those who can do that, and they have innate abilities to do amazing things effortlessly. It must be effortless, after all, because their life seem joyful and your life becomes miserable whenever you try the same things.

For proof that the thing that makes one person feel amazing makes another one miserable, please refer to: “professional” students, marathon runners, readers, and healthy-diet-eaters.

We tell ourselves we can’t accomplish goals because we don’t have enough motivation, but this is far too simple of an explanation. 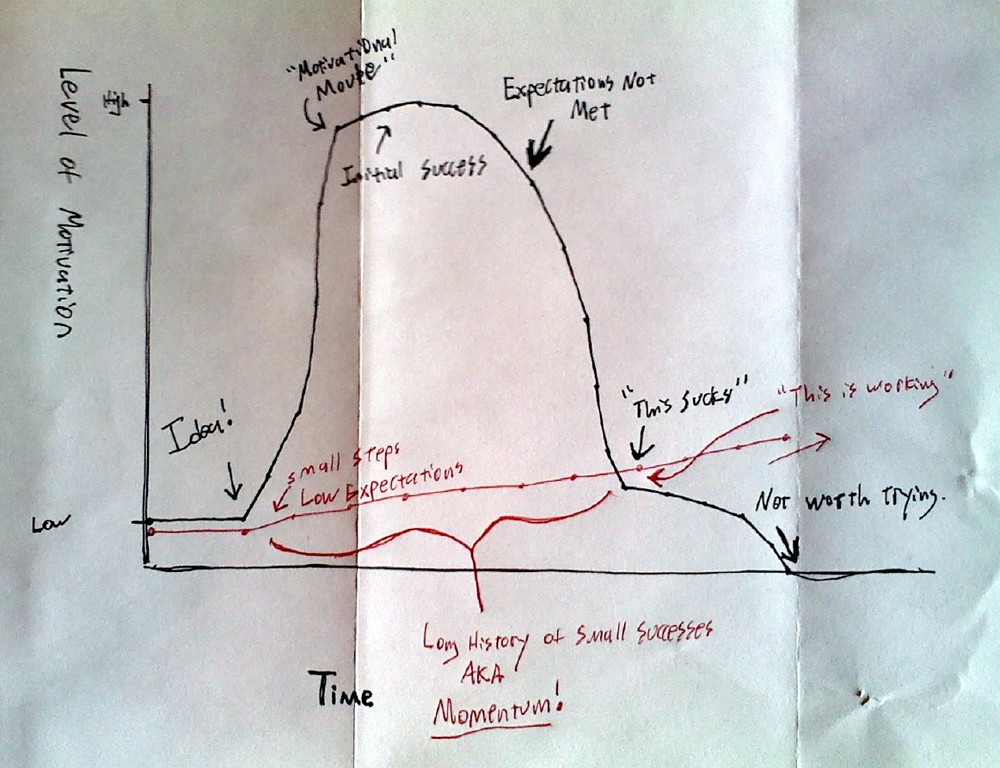 I propose an alternate method to building habits, and there are two important elements.

you have to run a marathon, but don’t try that hard.

Make sure to do well in this difficult class, but whatever you do, don’t spend a lot of hours studying.

The reason failure must be useful is this:

If your failure is an opportunity to feel shame and belittle yourself, you’re learning, very quickly, that attempts to change lead to you feeling like s**t. It also means that all expended effort is wasted, and you’re not only back where you started, but you’re worse off. (Because of the shame and self-deprecating feedback.)

The reason you cannot try very hard is this:

Motivation is limited. If you’re expending it all to make some change in your life, you have nothing left over to make other necessary choices and you get very unhappy very quickly.

Science has proven (and everyone knows intuitively) that willpower/motivation/discipline is a finite resource. It’s like your muscles - when you exercise, you get more and more tired, until you just can’t perform like you wish you could. Then you go home, eat some food and rest, and you’re ready to do it again.

If I try to undertake a new task, using my two rules, I must create a context in which I am more likely to succeed than not, and if I don’t succeed, my instinct is to examine my context, not my willpower. An easy example is this: I try to get up early, but if I’m going to bed at midnight, I’m not setting myself up for success, huh?

If I start going to bed at ten I can create a context where I am more likely to succeed at my goal. If I go to bed at midnight, I don’t try to get up early - why take the hit to my motivation when the context is already unfavorable?

What did you expect? #

When you are trying a new habit, there are huge ups and downs. It is foolishness to not expect this. Most people DO expect fluctuation, but if the expectation does not lead to preparation, it’s useless. I’ll talk more about preparation soon. 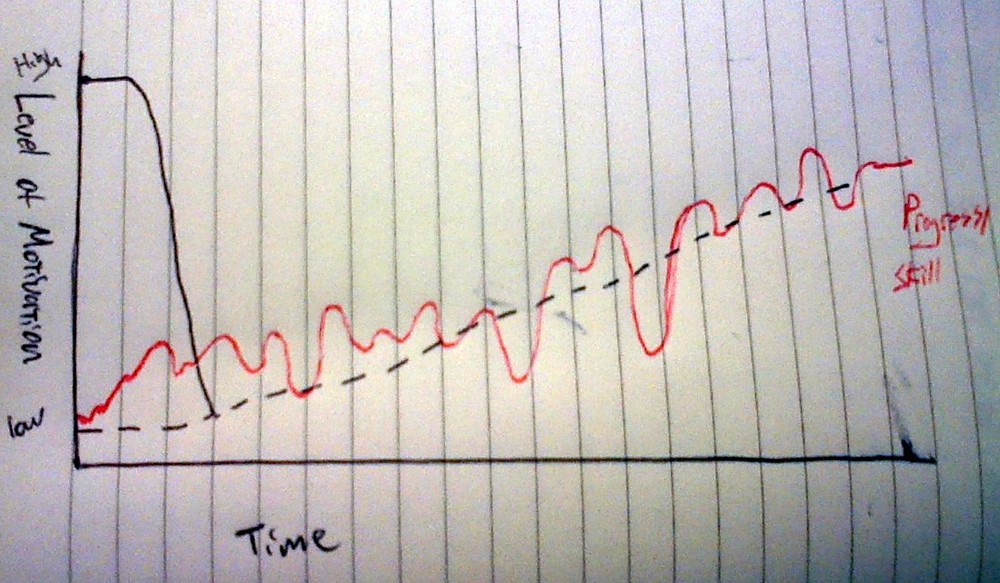 In the last few months, I’ve been working towards building healthy habits in three areas. I will devote at least the next three posts to detailing my successes and failures in these areas.